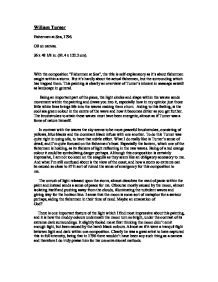 William Turner Fishermen at Sea, 1796. Oil on canvas. 36 x 48 1/8 in. (91.4 x 122.2 cm). With the composition "Fishermen at Sea", the title is self-explanatory as it's about fishermen caught within a storm. But it's hardly about the actual fishermen, but the surrounding which has trapped them. This painting is clearly an overview of Turner's interest in seascape aswell as landscape in general. Being an important part of the piece, the light circles and shape within the waves sends movement within the painting and draws you into it, especially how in my opinion just those little white lines brings life into the waves making them churn. ...read more.

To do this Turner was quite right in using oils, to have that subtle effect. What I do really like is Turner's sense of detail, and I'm quite focused on the fishermen's boat. Especially the lantern, which one of the fishermen is holding, as its flickers of light reflecting in the raw waves. Being of a red orange colour it could be symbolizing danger perhaps. Although this composition is certainly impressive, I am not too keen on the seagulls as they seem like an obligatory accessory to me. And what I'm still confused about is the view of the coast, and how a storm so extreme can be caused so close to it? ...read more.

Maybe an emanation of God? There is one important feature of the light which I find most impressive about this painting, and it is how the muddy colours underneath the moon turn so bright, under the contrast of its extreme dark surroundings. It slightly fooled me at first thinking the moon didn't emit enough light, but been caused by the harsh black colours. Almost as if it were a tranquil fight between light and dark within one composition. Clearly he was a great artist to have captured this in full intensity, being that in 1796 there wouldn't have been any such thing as a camera and therefore I do truly praise him for his unconventional methods. ...read more.