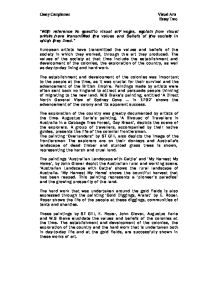 &quot;With reference to specific visual art works, explain how visual artists have transmitted the values and beliefs of the society in which they lived.&quot;

in 1792' shows the advancement of the colony and its apparent success. The exploration of the country was greatly documented by artists of the time. Augustus Earle's painting, 'A Bivouac of Travellers in Australia in a Cabbage Tree Forest, Day Break', depicts the scene of the explorers. A group of travellers, accompanied by their native guides, presents the life of the colonial frontiersman. The painting 'Overlanders" by ST Gill, also depicts the image of the frontiersman The explorers are on their donkeys and Australia's landscape of dead timber and stunted grass trees is shown, representing the harsh and cruel land. ...read more.

The hard work that was undertaken around the gold fields is also expressed through the painting 'Gold Diggings, Ararat' by E. Roper. Roper shows the life of the people at these diggings, communities of tents and shanties. These paintings by ST Gill, E. Roper, John Glover, Augustus Earle and W.S Blake elucidate the values and beliefs of the colonies at the time. The establishment and development of the colonies, the exploration of the country and the hard work that is undertaken both in day-to-day life and at the gold fields, are successfully shown in these works of art. Casey Campleman Visual Arts Essay Two ...read more.