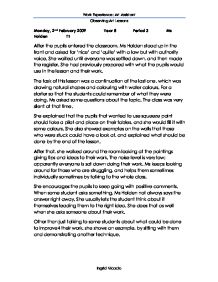 Monday, 2nd February 2009 Year 8 Period 3 Ms Holden T1 After the pupils entered the classroom, Ms Holden stood up in the front and asked for 'nice' and 'quite' with a low but with authority voice. She waited until everyone was settled down, and then made the register. She had previously prepared with what the pupils would use in the lesson and their work. The task of this lesson was a continuation of the last one, which was drawing natural shapes and colouring with water colours. For a starter so that the students could remember of what they were doing, Ms asked some questions about the topic. The class was very silent at that time. She explained that the pupils that wanted to use squeeze paint should take a pilot and place on their tables, and she would fill it with some colours. ...read more.

When some boys at the back start to mess around, Ms Holden at the front says in a louder tone to sit and quite themselves down. They obey. Ms Holden then said to the class that they should finish their work and pack up. She says in a louder voice to put their brushes down, so that they could pay attention to her instructions. She then says to put their work sensibly on the bench, and after that to tidy their tables up and wash their brushes and pilots. She explains that those who doesn't help will have extra time in the classroom. After everyone was behind their places as she told them, she checked the sinks to see if they were clean. Before letting them go, she said to everyone to put their blazers on and straight their uniforms up that she would be checking everyone before leaving. ...read more.