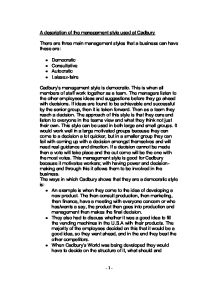 A description of the management style used at Cadbury

A description of the management style used at Cadbury There are three main management styles that a business can have these are: * Democratic * Consultative * Autocratic * Laissez-faire Cadbury's management style is democratic. This is when all members of staff work together as a team. The managers listen to the other employees ideas and suggestions before they go ahead with decisions. If ideas are found to be achievable and successful by the senior group, then it is taken forward. Then as a team they reach a decision. The approach of this style is that they care and listen to everyone in the teams view and what they think not just their own. This style can be used in both large and small groups. It would work well in a large motivated groups because they can come to a decision a lot quicker, but in a smaller group they can fail with coming up with a decision amongst themselves and will need real guidance and direction. ...read more.

The managers expect their orders to be carried out with without any disagreement or questions. Laissez-faire these managers intervene as little as possible and allow the groups to make all the decisions on their own. This allows the whole of the group to become leaders. A description of the culture of Cadbury There are four main cultures that business can have these are: * Task culture * Power culture * Role culture * Person culture Cadburys is a task culture. This means that they are mainly focused on getting the job done and are project led. Groups or teams within this cultural are not fixed but are made up of individuals brought together to achieve a specific task. Within the teams they need to have specialists, to help guide them on the right tracks instead of them heading of in the wrong direction. With this task culture the jobs will always get done to a high satisfaction. At Cadbury's there are many teams that work towards the same goals, which is very important in such a large company. ...read more.

It relies on the power or personality of the owner or directors who all the key decisions this can end up being a problem if these people change. the people that are consider to work well in this culture are like-minded to help with the approach of the running of the organisation. The structure tends to be loose and informal, it tends to be organised by functions Role culture this offers logic, reality and security. It can also get very frustrating when trying to get a job done. It has a formal structure, which is hierarchical. This organisation's jobs can be done by many people, even though the limits of the jobs are strictly controlled. The job or role can been seen to be more important then the people. Person Culture this organisation exists to serve the people in it. It is aimed to satisfy and motivate them. The style that this organisation works to is that the people are more important than the actual organisation. This style works best in reality because it is a small, informal flat organisation. It is found mostly in professional organisations such as management consultancy where each consultant works on individual projects. - 1 - ...read more.