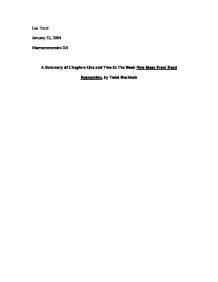 A Summary of Chapters One and Two In The Book New Ideas From Dead Economists, by Todd Buchholz.

The chapter closes reinforcing the idea that conventional economics do not explain everything. The emphasis in chapter two is on a man named Adam Smith. This is because Smith's theories were groundbreaking in the field of economics. Smith became enormously successful as an economist, especially so after he published his book An Inquiry Into The Nature And Causes Of The Wealth Of Nations. In his book, Smith aims to reveal the causes and effects of different actions in economics. Using this tool, Smith explains how one can become wealthy. Another of Smith's major ideas is related to the basic foundation behind economics: The human mind. ...read more.

Specialization can cause "one day's output [to] explode by 400,000%!" (25). According to Smith, there are three things that could make the economy grow. One is a larger labor pool. Two is the division of labor. And three is the use of new technology to increase work quality. While Adam Smith's ideas are the main focus of chapter two, there are several other important ideas discussed. One is that the nations become richer if markets spread. Another discusses the negative effects of assembly lines on the human psych. One more important point talked about in chapter one is how economics are linked to the real world through politics. Today, Smith's ideas are associated with conservative politics, limited government, and deregulation. He is without a doubt one of the greatest influences to the study of economics. ...read more.