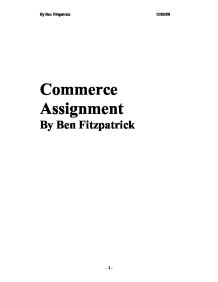 Investment Portfolio - Shares and other investments

Commerce Assignment By Ben Fitzpatrick Gordon Von Gecko Dear Mr Von Gecko, I am pleased to inform you of the progress of your investment portfolio. As you know, 1 month ago, 22 January, I made the purchase of 4 different types of shares on your behalf, in a range of industry groups. Your $100 000 has been invested in the share market for one month now and in this report I will detail the performance of all of the shares, which you will be pleased to know is all positive. The four shares that were purchased were in Babcock & Brown, Woodside Petroleum, Fortescue Metals Group and Flight Centre. Reasons for purchase There are several reasons for the purchase of each of the shares in companies that have bought as part of your investment portfolio. The money has been spread evenly over several industry groups, to minimise losses if one industry sector falls rapidly e.g. a cyclone wipes out mining in Western Australia. However, mining and oil have been travelling much more positively than other industry sectors in the sharemarket. For this reason a decision was made to invest in both the mining of minerals, through buying in Fortescue, and the exploration and production of oil and gas, in the course of purchasing shares in Woodside Petroleum. Helping these shares is the fact that there has been a resource boom as of late, due to increasing demand from Asia and other developing countries. Along with these investments, smaller amounts of money was used to invest in other areas in the share market, by procuring shares in Babcock and Brown, dubbed "mini Macquarie", in reference to their similarity to Macquarie Group, an extremely successful company, and by also buying shares in Flight Centre, based more on the need to diversify more than anything else, and because this share had the potential, having lost 27% of its share price in the fortnight leading up to purchase, to rebound and go back up quickly. ...read more.