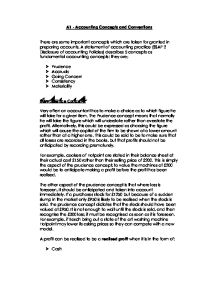 A1 - Accounting Concepts and Conventions There are some important concepts which are taken for granted in preparing accounts. A statement of accounting practice (SSAP 2 Disclosure of accounting Policies) describes 5 concepts as fundamental accounting concepts: they are; > Prudence > Accruals > Going Concern > Consistency > Materiality The Prudence Concept: Very often an accountant has to make a choice as to which figure he will take for a given item. The Prudence concept means that normally he will take the figure which will understate rather than overstate the profit. Alternatively, this could be expressed as choosing the figure which will cause the capital of the firm to be shown at a lower amount rather than at a higher one. This could be said to be to make sure that all losses are recorded in the books, but that profits should not be anticipated by recording prematurely. For example, cookers of Hotpoint are stated in their balance sheet at their actual cost �150 rather than their selling price of �200. This is simply the aspect of the prudence concept; to value the machines at �200 would be to anticipate making a profit before the profit has been realised. The other aspect of the prudence concept is that where loss is foreseen, it should be anticipated and taken into account immediately. If a purchases stock for �1250 but because of a sudden slump in the market only �950 is likely to be realised when the stock is sold. ...read more.

This shows the application of the 'Prudence Concept'. The Companies Act 1985 gives legal recognition to the accruals concept, stating that: "All income and charges relating to the financial year to which the accounts relate shall be taken into account, without regard to the date of receipt or payment". This has the affect as we have seen, of requiring businesses to take credit for sales and purchases when made rather then when paid for, and also to carry unsold stock forward in the balance sheet rather than to deduct its cost from profit for the period. The Going Concern Concept: Unless the opposite is known accounting always assumes that the business will continue to operate for an indefinitely long period of time. Only if the business was going to be sold would it be necessary to show how much the assets would fetch. In accounting records this is normally assumed to be of no interest to the firm. This is obviously connected with the cost concept, as if firms were not assumed to be going concerns the cost concept could not really be used, e.g. if businesses were always to be treated as though they were going to be sold immediately after the accounting records were drafted, then the saleable value of the assets would be more relevant than the cost. The SSAP 2 defines: "The Going Concern Concept implies that the business will continue in operational existence for the foreseeable future and that there is no intention to put the company into liquidation or to make drastic cutbacks to the scale of operation". ...read more.

An error is too trivial to affect anyone's understanding of the accounts is referred to immaterial. In preparing accounts it is important to assess what is material and what is not, so that time and money are not wasted in the pursuit of excessive detail. Determining whether or not an item is material is a very subjective exercise. There is no absolute measure of materiality. It is common to apply a convenient rule of thumb; for example to define material items as those with a value greater than 5% of the net profit disclosed by accounts. But some items disclosed in accounts are regarded as particularly sensitive and even a very small misstatement of such an item would be regarded as a material error. An example in accounts of a limited company might be the amount of remuneration paid to the directors of the company. The assessment of an item as material or immaterial may affect its treatment in the accounts. For example, the profit and loss account of a business will show the expenses incurred by the business grouped under suitable captions; under very small cases it may be appropriate to lump them together under a caption such as 'sundry expenses' because a more detailed breakdown would be inappropriate for such immaterial amounts. Example: If a balance sheet shows fixed assets of �3 million and stocks of �30,000 an error of �20,000 in the depreciation calculations might not be regarded as material, whereas an error of �20,000 in the stock valuation probably would be. In other words, the total of which the erroneous items forms part must be considered. ...read more.