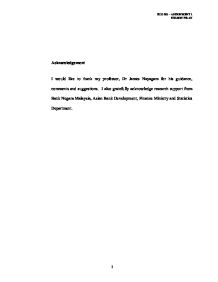 AN ANALYSIS OF MALAYSIAN ECONOMIC DEVELOPMENT FROM 1993 TO 2002

Acknowledgement I would like to thank my professor, Dr James Nayagam for his guidance, comments and suggestions. I also gratefully acknowledge research support from Bank Negara Malaysia, Asian Bank Development, Finance Ministry and Statistics Department. Executive Summary Over the past three decades, Malaysia has achieved growth and structural transformation in its economy. This review examines the Malaysian economic performance and its policies for the last 10 years (1993 - 2002). My approach to the review will cover the following: * What is the role of the government in the economy process? * What were the forms of government intervention? * What were the costs and benefits? * Could the government have used different policy mix? Based on the approach I will examine and present the conditions that was faced by Malaysia during the period of review along with the major developments since then. AN ANALYSIS OF MALAYSIAN ECONOMIC DEVELOPMENT FROM 1993 TO 2002 INTRODUCTION In this paper I will analyse the performance of the Malaysian economy for the past 10 years between 1993 and 2002. The analysis will be divided into two eras, pre (1993 to 1996) and post (1997 to 2002) Asian Financial Crisis. I will also present the economy polices implemented during the period of review and in the process identify whether the government's intervention had caused a positive or negative effect on the growth of the economy. In closing, I will conclude by commenting on the course of actions taken by the Malaysian government whether or not it could have been better. DATA This study is carried out in the context of the Malaysian economy for the period between 1993 and 2002. The key economic data was obtained from various sources; Gross Domestic Product (GDP), National Accounts from the Central Bank (Bank Negara Malaysia), Asian Development Bank and other statistics i.e. Inflation and Unemployment rates from the Malaysian Statistics Department. ...read more.

Monetary policy is aimed at controlling inflation while providing adequate liquidity to stimulate economic growth. Central Bank increase interest rates to curb rising inflation and strong credit expansion. Post Asian Financial Crisis ~ 1997-2002 Economy Growth Trend Malaysia is currently in its fourth year of economic growth following a deep recession caused by the Asian Financial Crisis of 1997-98. Until 1997, Malaysia experienced over a decade of uninterrupted economic growth, placing Malaysia as one of the fastest growing South East Asian economies [Table ]. The crisis trimmed Malaysia's growth rate to 7.5% in 1997 before the country plummeted into an unprecedented recession in 1998 when the regional financial and economical crisis intensified. Real GDP contracted by 7.5% in 1998. The economy rebounded back in 1999, growing 6.0% that year, perking further in 2000 with 8.6% growth then slowed down again in 2001 with a technical recession of 0.3%. Once more in 2002 it rebounded to 4.1% GDP. The fluctuation in the economic growth trend corresponds to the aftermath of the 1997 Asian Financial Crisis resulting in the decline in 1998. The global economy picked up with the boom in electronics in 2000 and finally slowed down with the external crisis of 2001. Besides the external environment, the government is spending for both investment and consumption has been a major factor in sustaining growth over the last five years. Principal Growth Sectors The manufacturing sector was affected by the slowdown in the world economy and contraction of global demand for electronic products and components. The sector recorded a steep decline of 13.7% in 1998, but recovered remarkably in the following year (1999) by registering a 13.5% growth. Between 1997 and 2002 the manufacturing sector's contribution to the GDP on the average was 30%. Other major sectors of the economy especially the services sector continued to expand strongly by 5% yoy on account of a better performance of government services and other sub-services. ...read more.

Fortunately, thus far its borrowing is mostly from local sources and only in small portions from foreign sources. On the whole, the country's performance is better than most of the other Asian countries. Malaysia recovered from the crisis without the assistance from International Monetary Funds (IMF). The other countries that relied on IMF assistance did recover from the crisis but at the expense of unrest (riots and labour protest) in their countries but in the case of Malaysia, this was avoided. IMF also mentioned that the unconventional measures introduced by the Prime Minister will not rebuilt the economy. But in 2003, IMF resigned to agreed that Malaysia's unconventional economic policies helped to stabilise the country's economy. The question on the effectiveness of the economy policies implemented by the government can be seen from the country's GDP performance. Furthermore IMF and World Bank had acknowledge the effectiveness of the economic measures which in itself says it all. I would like to conclude that with sheer determination on the part of the Prime Minister, the nation's economy was brought out of the slump. REFERENCE Asian Development Bank. (December 1999). Country Assistance Plan (2000-2002) : Malaysia retrieved at http://www.adb.org. Begg, D., Fischer, S. & Dornbusch, R. (1994), Economics, 4th edition, UK : Mc Graw-Hill Book Company, pp. 340 - 547. Kanitta, M., (2001), 'Malaysia - From Crisis to Recovery', International Monetary Fund, 27 August 2001, retrieved at http:www.imf.org Malaysia, Ministry of Finance. (2002). Economic Report 2002/2003. Kuala Lumpur : Percetakan Nasional Malaysia Berhad. Malaysia, Ministry of Finance. (2002). Economic Report 2003/2004. Kuala Lumpur : Percetakan Nasional Malaysia Berhad. Malaysia, National Economic Action Council. (1998). National Economic Recovery Plan retrieved from http://www.mir.com.my. McConnell, C.R. & Brue, S.L. (1999), Economics, 14th edition, Irwin/McGraw-Hill, pp. 330-386. McTaggart, D., Findlay, F. & Parkin., (2003), Economic, 4th edition, Addison Wesley, pp.504 - 772. Public Bank. (2000), 'Malaysia - Economic Performance and Prospects', Economic Review, December 2000, retrieved from http://www.publicbank.com.my Ramon V. Navaratnam. (1999). Healing the wounded tiger: How the turmoil is reshaping Malaysia. Malaysia : Percetakan Soonly Trading. ECO 501 - ASSIGNMENT 1 NELSON PILAY 1 ...read more.