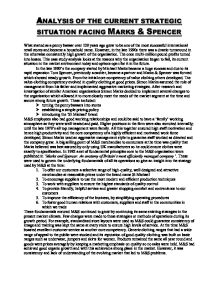 ANALYSIS OF THE CURRENT STRATEGIC SITUATION FACING MARKS & SPENCER What started as a penny bazaar over 120 years ago grew to be one of the most successful international retail stores and became a household name. However, in the late 1990s there was a drastic turnaround in the otherwise consistently high growth of the organisation. The once multi-million pound profits turned into losses. This case study analysis looks at the reasons why the organisation began to fail, its current situation in the market environment today and options open for it in the future. In the late 1880's the company started by Michael Marks became a huge success and due to its rapid expansion Tom Spencer, previously a cashier, became a partner and Marks & Spencer was formed which showed steady growth. From the initial core competency of value clothing others developed. The value-clothing competency evolved in quality clothing at good prices. Simon Marks assumed the role of management from his father and implemented aggressive marketing strategies. After research and investigation of similar American organisations Simon Marks decided to implement several changes to the organisation which allowed it to more closely meet the needs of the market segment at the time and secure strong future growth. These included: > turning the penny bazaars into stores > establishing a simple pricing policy > introducing the 'St Michael' brand M&S employees also had good working relationships and could be said to have a 'family' working atmosphere as they were well treated and paid. Higher positions in the firm were also recruited internally; until the late 1970's all top management were family. ...read more.

This coupled with the lack of challenging from store managers about strategies that were producing negative effects led to M&S losing their market share. Surveys by the Money Programme in 1991 showed customers were becoming decreasingly satisfied with M&S. Again, in an attempt to keep the chief executive pleased senior executives covered up these results. Along with this decline in M&S popularity new competition was emerging from both the top and bottom ends of the market. Retailers such as Gap, Oasis and Next sold merchandise as similar prices to M&S but were much more fashionable and hence suited the needs of the evolving market. At the bottom end competitors such as Matalan and supermarket chains began to offer similar products to M&S with similar levels of service but significantly lower prices. These companies began to erode M&S market share and gain its customers as M&S was no longer good value and due to their insistence on using more expensive British sources for merchandise they could no longer compete due to costs and lack of demand for their merchandise. M&S had started an expansion project in the early 1990's to move into overseas markets and had used its standard formula that had given success in previous years. 22 stores had been open in Canada, in America M&S sold under the Brooks Brother name and stores in France were opened with the plan to expand into Europe. After initially boasting a �130m for expansion a year M&S were forced to tell stores to cut spending in 1998. ...read more.

Acquiring of smaller competitors To lower the level of competition and make trading easier M&S could buy up smaller retailers. This would give M&S more control over the market and increase their market share without making many changes. For M&S to achieve organic growth and regain the market share they once had they need to firstly strengthen their core profit centres by selling more of their existing merchandise to their current customers. After this M&S can begin to rebuild it's reputation for quality and service and differentiate their products so customers perceive them to be of higher value then the competition. By keeping the price constant this should help take back segments of the market lost to competitors. Once this is achieved M&S can continue to look at options for product innovation. By introducing completely new and original products they can further strengthen their market segments. After this has been completed M&S should begin to market their existing merchandise to attract customers from new market segments through careful promotion planned by meticulous market research. Once they have established a foothold in other market segments they can begin to differentiate their merchandise within that market segment and further strengthen their position. Finally, M&S can begin to once again expand by looking at new product possibilities in completely new markets such as financial services. Therefore I would recommend M&S firstly disinvest loss-making subsidiaries to allow the organisation to concentrate on rebuilding its core business strength. This can be helped by forming a strategic alliance with other organisations not to encroach on each others market for the time-being. Smaller competitors should not be acquired at this stage until M&S is in a stronger financial position. ...read more.