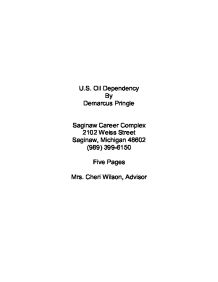 As time progressed, the United State's dependency for foreign oil has tremendously grown and is showing no sign of ceasing anytime soon. You may even say that America is addicted to oil. Our thirst

U.S. Oil Dependency By Demarcus Pringle Saginaw Career Complex 2102 Weiss Street Saginaw, Michigan 48602 (989) 399-6150 Five Pages Mrs. Cheri Wilson, Advisor Historical Review The first successful oil well was built by James Miller Williams in North America on a deposit located near the present-day towns of Oil Springs and Petrolia. The Tripp brothers first recognized the beds in 1851. After failing to develop their find, Williams jumped on the chance to purchase the wells. In his first two years, Williams pumped fifteen hundred m� of crude oil. He then began the first integrated oil company; exploring, drilling and refining the oil into finished products. "The Canada Oil Company," he decided to call it. These fields supplied ninety percent of the oil consumed in Canada and Petrolia for the next fifty years. By the turn of the century, it began to slow down. As the Petrolia oil rush hit a plateau and came to a standstill in Canada, those who worked the drills found their skills in high demand around the world to as many as eighty seven countries. Thus, the great oil fields in the Middle East, Gobi Desert, and South America were created. As time progressed, the United State's dependency for foreign oil has tremendously grown and is showing no sign of ceasing anytime soon. ...read more.

If we are to end our reliance on foreign oil, the result must be abrupt and revolutionary. January 31, 2006, President Bush addressed the state of the union. Energy production was the theme at many of his addresses, but it was time he took a shift. Mr. Bush now spoke of decreased consumption and greater efficiency. He spoke of funding research for clean energy and an alternative vehicle called the hybrid vehicle. "Keeping America competitive requires affordable energy. And here we have a serious problem: America is addicted to oil, which is often imported from unstable parts of the world," said Bush. To remain the dominant country we are today, we must begin to use an alternative vehicle. To thrive once again, we must leave oil behind us and press for the future. Just as Bush, I also feel the best way to break an addiction is through technology. Hybrid vehicles are the future of vehicles, not only in America, but worldwide! Many say we should just use less oil, or produce more of it. But I say we have based our whole lives on a non-renewable resource that may be exhausted in our life time. It's time for a dramatic change. Will it be hard to convert a country to another method of fuel? ...read more.

Hundreds of millions of dollars will be spent on the conversion of the gas stations, but I feel that money should not play an issue because what we are dependent on now will soon come to an end. Though hydrogen does use oil to be produced, it isn't the only way to produce hydrogen; there are many ways. Solar power, nuclear power, and even geo-thermal power, though a large amount of electricity must be used. Despite the advantages of hybrid vehicles, Americans are just not sure about them. Most likely, they will be pushed aside because of improvements in gasoline emissions. The future of hybrid vehicles is uncertain, but one thing is certain. World peaking is going to happen, with our reliance on outside sources for oil production. Our economy is destined for a disaster. It will take a tremendous effort from everyone to change the economy. It will not be instant or automatic. It will take time and will be a slow transition going from one to the other. It is cheaper to just keep getting oil from other countries, but the day is coming and we must be ready. The United States is depending on more outside sources for oil production. It has caused a major rise in fuel costs in the United States. Bush also commented, "By applying the talent and technology of America, this country can dramatically improve our environment, move beyond a petroleum-based economy and make our dependence on Middle Eastern oil a thing of the past. ...read more.