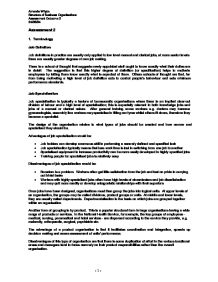 Assess the advantages of job specialisation.

Assessment 2 1. Terminology Job Definition Job definitions in practice are usually only applied to low level manual and clerical jobs, at more senior levels there are usually greater degrees of own job making. There is a school of thought that suggests newly appointed staff ought to know exactly what their duties are in detail. The suggestion is that this higher degree of definition (or specification) helps to motivate employees by letting them know exactly what is expected of them. Others schools of thought are that, far from being motivating a high level of job definition acts to control people's behaviour and sets minimum performance standards. Job Specialisation Job specialisation is typically a feature of bureaucratic organisations where there is an implied clear-cut division of labour and a high level of specialisation; this is especially relevant to both knowledge jobs and jobs of a manual or clerical nature. After general training some workers e.g. doctors may become gynaecologists, assembly line workers may specialise in fitting car tyres whilst others fit doors, therefore they become a specialist. The design of the organisation relates to what types of jobs should be created and how narrow and specialised they should be. Advantages of job specialisation would be: * Job holders can develop enormous skill in performing a narrowly defined and specified task * Job specialisation typically means that less work time is lost in switching from one job to another * Specialised equipment to increase productivity can be more easily developed in highly specified jobs * Training people for specialised jobs is relatively easy Disadvantages of job specialisation would be: * Boredom is a problem. Workers often get little satisfaction from the job and feel no pride in carrying out trivial tasks * Workers with highly specialised jobs often have high levels of absenteeism and job dissatisfaction and may quit more readily or develop antagonistic relationships with their superiors Once jobs have been designed, organisations must then group the jobs into logical units. ...read more.

The reasons for delegation are mainly practical, but some are idealistic. Practical reasons include: * Senior managers can be relieved of less important, or less immediate, responsibilities in order to concentrate on more important duties * Delegation enables decisions to be taken nearer to the point of impact, and without the delays caused by frequent reference upwards * Delegation gives managers the opportunity to experience decision making and the consequences of their decisions * Delegation encourages managers to learn how to cope with responsibility * Delegation enables organisations to meet changing conditions more flexibly, especially at the boundaries of their system Idealistic reasons for delegation include: * Delegation is a good thing for individual growth, and contributes to staff morale * Delegation is 'the sine qua non of empowerment' (Peter, 1988) * Delegation helps to enrich individuals' jobs and humanises work. Most organisations find the need to delegate forced on them by circumstances, especially the pressures on managers to concentrate on environmental issues rather than on internal problems. Overall, organisations have to adapt and grow whilst responding to environment and technology changes by developing more complex structures that are composites of the basic types. Both Hybrid and Matrix structures are composites of the basic type of organisation structure. The reasons why organisations divide into different structures is varied. Typically, structures develop out of functional lines (production, sales etc); geography (like Coca Cola); or by business. The reason will be about capitalising on some structural efficiencies or economies of scale to produce competitive advantage. The benefits are that the smaller (hopefully more logical) units will be more manageable, efficient and profitable. Perhaps being closer to their market and more adaptable. Possibly maximising on internal communications and transfer of knowledge. The consequences are (hopefully) that the benefits are realised. However, the best practice is to be found in organisations that use delegation positively as an important employee motivator as well as a means of facilitating effective decision-making throughout the organisation. ?? ?? ?? ?? Amanda Whyte Structure of Business Organisations Assessment Outcome 2 24/06/04 - 1 - ...read more.