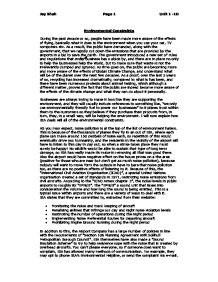 Environmental Constraints During the past decade or so, people have been made more aware of the effects of flying, basically what it does to the environment when you use your car, TV computers etc. As a result, the public have demanded, along with the government, that we rapidly cut down the emissions that are provided by the airports in a bid to save the Earth. The government introduced a new set of rules and regulations that every business has o abide by, and there are in place no only to help the businesses help the World, but to make sure that waste is not the irrelevantly dumped and ignored. As time goes on, the public are becoming more and more aware of the effects of Global Climate Change, and understand what will be of the planet over the next few decades. As a proof, over the last 5 years of so, recycling has increased dramatically, compared to what is has been, and there have been numerous protests about animal ...read more.

No wildlife would be able to sustain that type of long term damage, so BIA has really made its make in removing all that was good there. Also the airport would have negative effect on the house prices on a the area (positive for those who are near but don't get as much noise pollution), because nobody will want to move form the outside in have to bare that noise pollution too, as there are no positive effects of listening to it. Because of this, the "International Civil Aviation Organisation (ICAO)", a special United Nations organisation created a set of standards in 1971, restricting noise emissions from civil aircrafts. According to the "ICAO Annex chapter 3", the noise levels in public airports to roughly 95 "EPNdB". The "EPNdB" a sound unit that takes into consideration the volume and how long the sound is being emitted. This is a typical issue within airports and there are a variety of ways to deal with it. ...read more.

Once the complain is received, it will be logged and dealt with, using a full investigation (Airport Noise and Operations Monitoring System) which will make sure that nothing is left uncovered. In the end, BIA will act according to what the results of the investigation have said, and they will respond to the person(s) who made the complaint. BIA is currently developing at such a rapid rate, along with the 9 million passengers that fly through their doors each year, they have secured of 10,000 jobs within their company. This type of fortune has netted them a total of �140 MILLION points (net), so they do have to care for their environment. Despite this, depending on that inflation rates are like, will most likely weight how much BIA is willing to help the environment. For example if there is a low inflation rate, BIA may be tempted to help the environment more, and if there is a high interest rate, they may have to be more careful on where they spend their money. Jay Shah Page 1 Unit 1 -1D ...read more.

In summary, the report is quite good. The student understands the impact that the business is having of the environment, and states how the business is resolving these issues as best as the business can. However I would suggest ensuring ...

In summary, the report is quite good. The student understands the impact that the business is having of the environment, and states how the business is resolving these issues as best as the business can. However I would suggest ensuring that all sentences are correct and accurate, as some need altering ever so slightly. The student understands that consumer's often demand business to be environment friendly with their business operations. The student does recognise that businesses in turn, gains the customer's trust which is quite difficult. The ability to acknowledge this is quite good, and will show the examiner good understanding of how businesses operate.

The report states 'a new set of rules and regulations', this should be replaced to 'a new set of laws and regulations'. This is due to that laws are in place which companies cannot break. Certain rules may be voluntarily and it's often best to only state the laws/regulations. The writing style is quite good, the student uses good use of English with little spelling/grammar errors. In addition, the report is spilt into manageable paragraphs which can be read with ease.