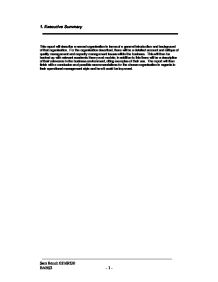 1. Executive Summary This report will describe a named organisation in terms of a general introduction and background of that organisation. For the organisation described, there will be a detailed account and critique of quality management and capacity management issues within the business. This will then be backed up with relevant academic theory and models; in addition to this there will be a description of their relevance in the business environment, citing examples of their use. The report will then finish with a conclusion and possible recommendations for the chosen organisation in regards to their operational management style and how it could be improved. 2. Introduction 2.1 Background BMW is primarily a German automobile company. It also has operations in aircraft engine production; electronic systems and hardware production; finance; and service. It had revenues of more than $27 billion and net profits of nearly $700 million in 1990, with about 65,000 employees. Bayerische Maschinen Werke GmbH as it is otherwise known was the surviving entity of a merger in 1955 between BMW and Allegemeina Flugzeug Werke (AFW). BMW has a history dating all the way back to the early 1920s when it was founded as a machine shop on the outskirts of Nuremberg. ...read more.

This is most important in organisations where profitability is linked to that of capacity and the prices charged for their product or service. BMW is already a leader in the niche car segment of the automobile industry. To retain that status BMW built a $660 million Research & development centre and plans to invest more than $1 billion each year in finding new ways to exploit their position as a market leader. BMW are aware of the fact that they are not one of the biggest companies in the industry and can't mimic the bigger companies who have far greater capacity and financial power. BMW try to innovate new ways to stay ahead of their competitors. They designed a new manufacturing plant where the cars would move down the assembly line on an independently powered gantry. The new technology would produce sound waves so that collisions can be avoided, thus reducing the need for more workers and also reducing the risk of unwanted accidents in the plant. The output achieved by any capacity management system depends on a number of factors that relate the resources currently available to the actual output of the organisation. It is sometimes inevitable in the niche car segment that an organisation will run out of capacity to cope with the ever changing levels of demand. ...read more.

Performance feedback, audit results, and customer opinion surveys are the ways in which organisations know if they are doing there job to satisfactory standard. BMW make sure that the assembly workers are aware of the consumers' requirements by providing suitable training and sound environment so that those requirements can be met. Organisations that cut down on investment in employee development will suffer a decrease in employee performance due to the close relationship between the two, and this will ultimately filter down to the consumers. Operations management in relation to automobile manufacture is crucial in defining priorities and identifying possible problems. One possible problem that might be confronted in the near future is that of overcapacity in terms of passenger cars. It is seen that other cars such as sport-utility vehicles don't suffer from overcapacity as they are usually custom made to the consumers' preferences. Passenger cars are normally batch produced on a production line in their thousands and organisations have a wealth of stock kept in their inventory. Automakers usually add capacity in the 100,000s so the market is never satisfied precisely; there is either a demand lag or a saturation of the market. Costs remain vitally important in making strategic product-line decisions. Regardless of the preferred quality or productivity quota, BMW must stay concerned with the continuous improvement of the business by improving quality, productivity, customer service, and delivery. 5. ...read more.