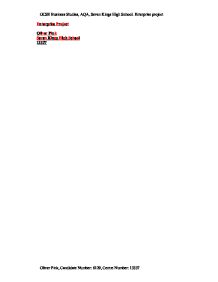 Enterprise Project Oliver Pink Seven Kings High School 13337 Contents Page 1.0 Introduction 2.0 Desk Research of market 3.0 Target Market Field Research 4.0 Product Development Field Research 5.0 Pricing 6.0 Advertising and promotion 7.0 Place 8.0 Conclusion Introduction My project is to research a business of my own choice. To do this I must research into all aspects of a business, using books, people, and computer resources. I will have to use a company/product which isn't doing so well so I can think of a way of improving it. My objective is to investigate the market and using the 4 P's, so it will create a successful new product that will be sold in the UK, so the business will hopefully be more popular and will expand by having my product, Viennetta is an ice cream product made in Unilever factories and sold under the various Heartbrand logos around the world. It was launched first by Wall's Ice Cream Ltd in 1982 using a technique devised by Kevin Hillman. The original Viennetta was a multi-layered product comprising layers of vanilla ice cream with sprayed on 'chocolate' layers. The layers of ice cream were extruded, one after another, onto trays sitting on a moving belt. The rate of extrusion was greater than the speed of the belt which caused a deliberate 'bunching' of the ice cream; each layer was extruded at a different speed to the previous layer. The final effect was akin to a series of waves rippling through the product. This visual aspect combined with the in-the-mouth contrast of the smooth ice cream covered in crisp 'chocolate' to give the product an instant appeal. The 1990s focused on new flavors such as mint, strawberry, cappuccino and praline. It was also the decade when Viennetta was given thicker and wider chocolate flavor layers - 25% more, in fact! There was also a glittering promotion launched in 1993 - 10 sets of diamond necklaces and 100 sets of diamond earrings, each worth �5000, were up for grabs. ...read more.

I was expecting everyone to choose the lowest price to be on the answer column on my questionnaire as everyone wants everything as cheap as possible, but this time I was shock as my audience choose the middle answer which has given me extra information as I know what price they want it, and they want a good product for their money. My fifth question was to see what new flavours would my target market like so I ask them "what flavour ice cream would you like?"I ask them this question as I don't know what my target market likes so this gives me a certain idea. This helps me as I might produce a product which my target market won't like, so I've given them unique flavours to choose from. I was expecting my target market to have the "Cucumber and mint ice cream with thin flakes of dark chocolate?"If they are going to have something after their dinner they would like something refreshing, instead "coffee flavoured ice cream with thin flakes of almond flavoured white chocolate" got the highest votes this tells me they like high levels of flavour. My sixth question I asked my audience was "what size would you like the product to be?" I ask this question because you can have this product in different styles as I don't know which style my target market would like the most, for example a lolly or a tub or ice cream. I was expecting my audience to have the Viennetta in a different way for example "ice cream on a stick" instead of a tub because its quick and easy to eat and normally lollies are cheaper so some children might buy it but the "750ml tub" got the highest vote of 40% so they liked how the Viennetta was made before in a big box. My Product Life Cycle As you can see my first stage is the Introduction, this is when the product is introduced; sales will be low until customers become aware of the product. ...read more.

Trade Market Directed - Marketers use sales promotions to target all customers including partners within their channel of distribution. For my product I have decided that my advertising budget will be �600,000 this will cover the cost of advertising my product. The reason my marketing is so high is because I I'm going to use "Above the line" promotion and have television adverts and a couple of magazine adverts, I chose this way as it gives me a higher amount of audience as it will bring the whole country instead of having a local newspaper which only tells the local town. An approximate break down of total cost in Advertising Television � 500,000 Magazine � 100,000 � 600,000 As you can see mainly televisions adverts are going to be my main source of advertisement as it pulls the highest amount of audience, this is the best as it will show it to everyone and not in certain locations i.e. a local newspaper. The problem I'm going to have is television adverts are extremely expensive so i won't have many. I also got magazine adverts which will hopefully show my product to different people so more of my target market will buy my product. There are many legal constraints on how I can promote my product. These laws help to provide a fair advert which won't make it unfair for other companies, when they have their advert. The reason they have laws is, for example companies might say their prices is lower or their food is better than their competitors etc. Some of the laws I will have to look so I can advertise my product are: The Trade Description Act 1968 The Consumer Credit Act 1974 Sales of Goods Act 1979 and the Supply of Goods and Services Act 1982 The Sale and Supply of Goods Act 1994 Advertising Standards Authority ?? ?? ?? ?? GCSE Business Studies, AQA, Seven Kings High School. Enterprise project Oliver Pink, Candidate Number: 6129, Centre Number: 13337 ...read more.