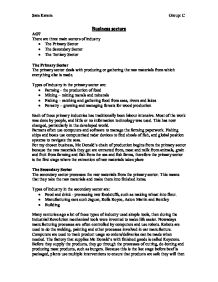 There are three main sectors of industry

The primary sector deals with producing or gathering the raw materials from which everything else is made.

Types of industry in the primary sector are:

Each of these primary industries has traditionally been labour intensive. Most of the work was done by people, and little or no information technology was used. This has now changed, particularly in the developed world.

Farmers often use computers and software to manage the farming paperwork. Fishing ships and boats use computerised radar devices to find shoals of fish, and global position systems to navigate the seas.

Types of industry in the secondary sector are:

Many centuries ago a lot of these types of industry used simple tools, then during the Industrial Revolution mechanical tools were invented to make life easier. Nowadays manufacturing processes are often controlled by computers and use robots. Robots are used to do the welding, painting and other processes involved in car manufacture.

Computers are used to track product usage so orders/deliveries can be made when needed. The factory that supplies Mc Donald’s with finished goods is called Keystone.  Before they supply the products, they go through the processes of cutting, de-boning and producing meat products, such as burgers. Because this is the last stage before beef is packaged, plants use multiple interventions to ensure that products are safe they will then deliver the products frozen, chilled and ambient. Products will be stored at appropriate temperatures to maintain the product is in perfect condition with the precise cooking procedures to ensure the highest standards of food quality and safety is provided.

The secondary sector is where the products are made, this means if a problem occurs in the primary or secondary stage, Mc Donald’s will suffer by having difficulty selling the food therefore will receive lower profits.

The tertiary sector provides services to businesses or individuals such as:

These industries involve a lot of paperwork. Paper records were originally handwritten, then machinery such as the typewriter and calculator made paperwork quicker and more efficient. Now ICT has replaced these older methods. Computers are used to word process, calculate and maintain data records.

As countries become more developed there is an increasing need for tertiary sector services. The UK has always employed large numbers of UK workers.

Mc Donald’s is in the tertiary sector because they provide a service, where the food made in the secondary sector is cooked in the premises and sold to general public, McDonalds offer high quality fast food that is located in places that are of convenience to the public

Growth and decline of business sectors

As we have seen countries in their earliest stages of development tend to rely far more on primary industries, which include farming, mining, fishing and the immediate use of raw materials. Over the years the primary, secondary and tertiary have changed in the way that they are used. For example in the 1900 the primary sector was used more because people produced their own food and had their own animals for meat, but as the years have gone on people started to trade the food that they produced and the animals they owned for other products.

In the UK until relatively recently most of the natural resources we needed came from our own country. But increasingly these are being imported. There has also been this trend in manufacturing which have been fewer businesses involved and far less people employed.

The table above shows that most of the working population in the UK, are employed in the tertiary sector whereas less people working in the primary and secondary sector, this is because of cheaper foreign imports, for example Primark retailer, instead of paying a minimum wage of £5.52 to tailors in clothing factories in the UK, they will pay as little as £1 to children that carry out the same job in India, which means the business will benefit of spending less amount of money on expenses. In every country the industrial sectors change. In the UK the primary and secondary sectors are declining while the tertiary sector is expanding, this is because large businesses will only produce goods, or offer a service if it’s in demand where they know they will make money. This means if the demand increases for products or services, then the industry will start to rise, and more people will get employed. For example as a tertiary industry Mc Donald’s employed 31,589 people in 1993 due to customers high demands by the end of 2005 they reached 48,054 which means an increase of 52%

The secondary sector has also declined because cheap foreign imports caused closure of some British companies, therefore products such as clothes, rugs, shoes, bags, electronics are usually imported from China, Taiwan, Japan, India and Indonesia because they are able to produce goods much more cheaply than the UK due to lower labour costs. Also building factories abroad costs a lot cheaper, therefore less to pay and more profit could be made.

The Internet also made it easier for people to import cheap goods by just making orders and payments online.

The tertiary sector is increasing because businesses are attracted towards profitable activities and away from unprofitable ones such as increasing sales and profits, employing more staff, operating from more outlets and producing on a larger scale.

With very few exceptions, every big company began as a small company, often with just one or two enterprising individuals at its head, example Michael Marks arrived in this country from Russia in the nineteenth century speaking very little English. He set up as a door-to-door hawker of buttons, needles, ribbons and other small items. He progressed to selling from market stalls, setting up in partnership with Tom Spencer. Today Marks and Spencer is the best-known brand name in the United Kingdom.