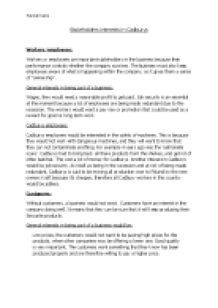 ﻿Hannah Caine Stakeholders interests in Cadburys Workers/employees: Workers or employees are important stakeholders in the business because their performance controls whether the company survives. The business must also keep employees aware of what is happening within the company, so it gives them a sense of ?ownership?. General interests in being part of a business: Wages, they would need a reasonable profit to get paid. Job security is an essential at the moment because a lot of employees are being made redundant due to the recession. The workers would want a pay rise or promotion that could be used as a reward for good or long term work. Cadburys employees: Cadburys employees would be interested in the safety of machines. This is because they would not work with dangerous machines, and they will want to know that they can not contaminate anything. ...read more.

Cadburys customers: Cadburys customers will be interested in the price and quality of the product (chocolate bar). This is because they would not pay a lot of money for something that has been produced with cheap ingredients. However they will be prepared to pay extra for expensive and well produced products. They will also be interested in the hygiene of the factory and the machinery during the production line. Managers: Managers are very important for the business. They need to know what?s happening in the business, and they need to be in control. There interests in being part of the business would be: One of the main interests that the managers have in a business would be salary. Another is the employees. This is because they need to make sure they are all working appropriately. There interests in being part of the Cadburys business would be: Job security is important for any stakeholder; however managers are especially eager because it would be hard for them to find other jobs if the company moved e.g. ...read more.

There interests in being part Cadburys would be: Any pollution or damage to their local area. They wouldn?t buy any products that are harming or affecting their community. Another point would be traffic because if the company?s always transporting supplies then they are likely to block the roads. Government: All businesses are affected by laws and legislation, and therefore governmental decisions impact on business functions. The government has an interest in businesses doing well as this helps to keep employment high and contributes to the gross national product. There interests in being part of the business would be: They need to make sure the factories are safe so that none of the employees or staff get injured because this would then put them out of work, which would not be good for the country. There interests in being part Cadburys would be: Cadbury is employing lots of people which are good for the country. Another reason would be that Cadburys does well in business because then they are able to pay more tax which will help with healthcare and education. ...read more.