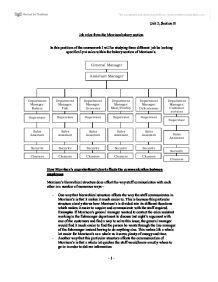 Job roles from the Morrison bakery section In this partition of the coursework I will be studying three different job be looking specifically at sales within the bakery section of Morrison's. How Morrison's organisational chart affects the communication between employees Morrison's hierarchical structure does affect the way staff communicates with each other in a number of numerous ways - - One way that hierarchical structure affects the way the staff communicates in Morrison's is that it makes it much easier to. This is because this particular structure clearly shows how Morrison's is divided into its different functions which makes it easier to acquire and communicate with the staff required. Example: If Morrison's general manager wanted to contact the sales assistant working in the fishmonger department to discuss last night's argument with one of the customers and find a way to solve this issue; the general manager would find it much easier to find the person he wants through the line manager of the fishmonger instead having to do anything else. This makes life a whole lot easier for Morrison's as a whole as it saves plenty of energy and time. - Another way that this particular structure affects the communication of Morrison's is that a whole lot quicker the staff would know exactly where to ...read more.

What are the disadvantages of Morrison's organisational chart? Using this type of chart in Morrison's; the main disadvantage is that there are so many managers, staff and other employees involved that it becomes increasingly difficult to look out when trying to acquire certain information; this also means that it would hard to handle and modify, when necessary, that it may not be up-to-date and this would cause all sorts of confusion within the business; and money may be lost in doing so. Another disadvantage of Morrison's hierarchical structure is that because there are so many staff, levels involved it becomes very complicated and makes communication within the company very slow and ineffective. Communication is very important to Morrison's as it allows the staff to constantly be updated with important information which helps the company adapt to the situation; so if the hierarchical structure is having a bad affect on the way the Morrison's staff communicate with each other; this is also having it's affects on things such as Morrison's profit, customer base as well as public image. Assistant manager The responsibilities of an assistant manager in the Morrison's bakery section would be to take charge of a big department for instance one of them could be production. ...read more.

Lastly the responsibilities are to ensure that necessary administration is carried out. With the responsibility of being a sales assistant you would have to carry out daily activities include serving the customers in the bakery department, and operating the till and taking money. Complete any documentation that is necessary, laying out the products, restock and tidy away at the end of the day. Regularly clean the area, and to follow the supervisors instructions. The job security that comes with this varies as this is low skilled and so easily replaced if they do not do their job as expected. The decision making that comes with this are small, mostly generally only about themselves and their actions at work. To do this job you would have to have these qualifications, skills and qualities: possibly an NVQ or equivalent or working to a modern apprenticeship. Should be able to communicate well with customers, and able to complete necessary administration and operate the till. Also you need to be able to present food well and display a professional clean appearance. You need to be hard working and motivated with technical skills where appropriate, and to be reliable. The pay and benefits that come with this job is a starting wage depending on experience �5 per hour. ?? ?? ?? ?? Unit 2; Section B - 1 - ...read more.