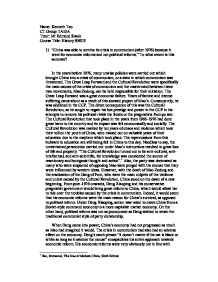 &quot;China was able to survive its crisis in communism (after 1976) because it went for economic reforms and not political reforms.&quot; To what extent is this accurate?

Name: Kenneth Teo CT Group: 1A13A Tutor: Mr Edmund Kwok Course Title: History 9067/3 1) "China was able to survive its crisis in communism (after 1976) because it went for economic reforms and not political reforms." To what extent is this accurate? In the years before 1976, many unwise policies were carried out which brought China into a crisis of communism, or a state in which communism was threatened. The Great Leap Forward and the Cultural Revolution were specifically the main causes of the crisis of communism and the mastermind between these two movements, Mao Zedong, can be held responsible for their initiation. The Great Leap Forward was a great economic failure. Years of famine and intense suffering came about as a result of this skewed project of Mao's. Consequently, he was sidelined in the CCP. The direct consequence of this was the Cultural Revolution, as he sought to regain his lost prestige and power in the CCP in his attempts to remove his political rivals the liuists or the pragmatists from power. The Cultural Revolution that took place in the years from 1966-1976 had done great harm to the country and its impact was felt economically and socially. ...read more.

The crisis in communism had also had an adverse effect on the economy. Deng's catch phrase "it doesn't matter if the cat is black or white so long as it catches the mouse" encapsulates his entire approach towards economic reform. His economic reforms were very obviously not in line with communism at all but he felt that if they could bring greater prosperity to China, it was worth it to adopt these new measures. The reforms took place largely in rural China. There was increased emphasis and investment on consumer industries as opposed to the heavy industry oriented economy under Mao's regime. Prices rather than designated outputs were now employed to give farmers more motivation to plant more lucrative crops. Privatisation was now encouraged and all the traditional representatives of the old communist economy, such as the communes and the Household Responsibility System, were abolished. Simultaneously, "a whole range of new industrial enterprises, known as Township and Village Enterprises, were established in the rural areas"2. The switch to a more capitalist economy was obvious for all to see. ...read more.

Deng proved his point during the Tiananmen incident that took place in 1989. Resentful and dissatisfied with Deng, hordes of students gathered at Tiananmen to put demands to him for further change, radical change in fact. However, his stance did not waver, and in a great show of iron-fisted dictatorship, ordered the army to put down the demonstrators by force. Political reform was evidently not part of Deng's plan for China and played no part in its survival after the crisis of communism. However, in another light, perhaps it was Deng's political grip on China which got the country out of its crisis. In Russia, the establishment of perestroika and glasnost at the same time heralded doom for Soviet communism as the people, suppressed by years of communist rule, quickly and forcefully acted against it once it had the chance. However, Deng's stubbornness ensured that China remained a communist country. When the USSR disintegrated, China still stood as a communist power. In conclusion, it is plain to see that Deng Xiaoping's introduction of economic reform greatly aided China's progress and alleviated the crisis of communism. No political reform was initiated by him but this was the very reason why communism remained intact in China, whilst it was obliterated elsewhere. ...read more.