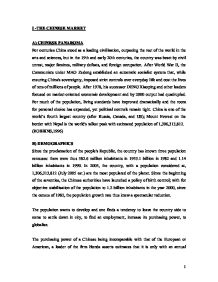 I -THE CHINESE MARKET A) CHINESE PANAROMA For centuries China stood as a leading civilization, outpacing the rest of the world in the arts and sciences, but in the 19th and early 20th centuries, the country was beset by civil unrest, major famines, military defeats, and foreign occupation. After World War II, the Communists under MAO Zedong established an autocratic socialist system that, while ensuring China's sovereignty, imposed strict controls over everyday life and cost the lives of tens of millions of people. After 1978, his successor DENG Xiaoping and other leaders focused on market-oriented economic development and by 2000 output had quadrupled. For much of the population, living standards have improved dramatically and the room for personal choice has expanded, yet political controls remain tight. China is one of the world's fourth largest country (after Russia, Canada, and US); Mount Everest on the border with Nepal is the world's tallest peak with estimated population of 1,306,313,812. (ROBBINS,1996) B) DEMOGRAPHICS Since the proclamation of the people's Republic, the country has known three population censuses: there were thus 582.6 million inhabitants in 1953.1 billion in 1982 and 1.14 billion inhabitants in 1990. In 2005, the country, with a population considered at, 1,306,313,812 (July 2005 est.) are the most populated of the planet. Since the beginning of the seventies, the Chinese authorities have launched a policy of birth control; with for objective stabilisation of the population to 1.2 billion inhabitants in the year 2000, since the census of 1982, the population growth rate thus knew a spectacular reduction. The population wants to develop and one finds a tendency to leave the country side to come to settle down in city, to find an employment, increase its purchasing power, to globalise. The purchasing power of a Chinese being incomparable with that of the European or American, a leader of the firm Honda asserts estimates that it is only with an annual average 2000-dollar salary, that the Chinese families will think of offering themselves a car. ...read more.

Technology Transfer � China has agreed that it will not condition import or investment approvals on technology transfer or on conducting research and development in China. � China will also have to provide better intellectual property protection for technology that is transferred and eliminate requirements mandating that the Chinese partner in a joint venture gains ownership of trade secrets after a certain number of years. Offsets � China has agreed that importation and investment will not be conditioned on providing offsets. Other Commitments � To alleviate the uncertainty associated with China's inconsistent application, refund, and waivers of its 17% VAT tax, China has agreed to apply all taxes and tariffs uniformly to both domestic and foreign businesses. � China has agreed not to apply or enforce export-performance requirements and similar requirements as a condition on importation or investment approval. This would ensure that products from any U.S. manufacturing facilities in China would not be encouraged to compete with U.S.-made autos and auto parts in other markets, including the U.S. Post WTO Implementation China has begun to honor its WTO commitments. On January 1, 2002, the tariff for cars below 3L was lowered from 70 percent to 43.8 percent and for cars above 3L, from 80 percent to 50.7 percent. It was the biggest cut after the country's entry into the WTO in December 2001. In addition to lowering tariffs, China will grant a total auto import quota of US$8 billion this year. As predicted, the tariff decrease led to the price of imported vehicles declining by 15 per cent. In order to stay competitive, local manufacturers, such as Shanghai General Motors, Shanghai Volkswagen, Tianjin Automotive Industry Group, Dongfeng Citroen and First Automotive Works (FAW), cut prices. For example, Shanghai General Motors reduced the price of its 2.5-litre Buick sedan by 30,000 yuan (US$3,610). China's biggest automotive group, FAW, has cut car prices by an average of 30,000 yuan. ...read more.

- The garages (2S non-retailers) : they will provide after-sales service and spares. - The Chrono workshops : these provide immediate maintenance without appointment. D) PRICE List price Citroen don't want to make an aggressive price policy to enter the market with this new compact car. There already are several models in the segment of Compact cars and major brands are now implemented in China and we don't want to sell a cheap product at any price. Citroen want to keep their strong brand image while increasing with time our market share, and want above all to establish the brand. Thus, Citroen are going to sell the C3 at a price between 10000� and 15000� (between 70000 Yuans and 105000 Yuans: 85000 Yuans would be a very good price) Discounts Citroen could provide discounts to state institutions because they would be able to buy a big amount of cars. Citroen should develop a specific commercial policy towards professionals. Financing & leasing options Citroen are going to provide financing services. It means that we will have to make a partnership with local banks to provide a high range of services. It could help in getting market share in such a country where buying a car is often a huge decision because of the price. Conclusion China's rapid economic development in the past twenty years has had a significant impact upon EU-China trade and economic relations. China is the EU's third non-European trading partner after the US and Japan, and China's second largest export market. The EU trade deficit mainly reflects the effect of market access obstacles in China. The EU welcomed China's accession to the World Trade Organisation in late 2001, which came after 15 years of tough negotiations. Membership will bring benefits both to China and to its trading partners, cementing China's place in the global economy and ensuring a greater degree of certainty for traders in China and world-wide. ...read more.