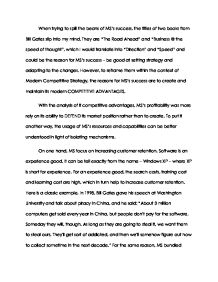 When trying to spill the beans of MS's success, the titles of two books from Bill Gates slip into my mind. They are "The Road Ahead" and "Business @ the speed of thought", which I would translate into "Direction" and "Speed" and could be the reason for MS's success - be good at setting strategy and adapting to the changes. However, to reframe them within the context of Modern Competitive Strategy, the reasons for MS's success are to create and maintain its modern COMPETITIVE ADVANTAGES. With the analysis of it competitive advantages, MS's profitability was more rely on its ability to DEFEND its market position rather than to create. ...read more.

Here is a classic example. In 1998, Bill Gates gave his speech at Washington University and talk about piracy in China, and he said: "About 3 million computers get sold every year in China, but people don't pay for the software. Someday they will, though. As long as they are going to steal it, we want them to steal ours. They'll get sort of addicted, and then we'll somehow figure out how to collect sometime in the next decade." For the same reason, MS bundled Office Suite, expanded server platforms, and gave many stuffs/features for free like IE and Media Player. ...read more.

As a result, MS stands above its competitors and reaps its profit like printing money. For example, while application software price dropped by an average of 8.9% at 1989, MS could raise its OS price. While WordPerfect was priced at $79, MS charged $249 for upgrades of Office 2000. The challenges MS faced somehow derived from its own marketing activities. The antitrust litigation is a warning for its aggressive assault on its competitors. In general, Microsoft should keep focus on defending its market positions, using its resources and capabilities cautiously and smartly. Its isolation mechanisms could be enhanced by strategies like product development and acquisition, platform integration, user and channel enticement, all happen at prohibitive cost. ?? ?? ?? ?? ...read more.

In summary, the report is quite good. The report states how Microsoft approach to business and IT, ensures that there company as a whole is successful. However there is a lack of other technology companies which MS have to take ...

In summary, the report is quite good. The report states how Microsoft approach to business and IT, ensures that there company as a whole is successful. However there is a lack of other technology companies which MS have to take into account. The report states that Bill Gates made a speech in China regrading it's privacy issues, and this shows in-depth understanding of the subject matter and this shows the examiner that the student is actively seeking information outside of lessons.

The student uses analysis the various information and states a number of benefits/drawbacks to each different approach and there overall conclusions are quite good. This shows in-depth understanding to the examiner. However the report doesn't list any real examples of Microsoft's competitors and this is quite a concern. The report could link the theory to the commercial side of a number of different technology companies. One example may be the use of Apple, as there have broken the tablet market, although Microsoft is slow to adapt to this as of yet.

The report states the term 'MS', however the student has listed this before hand. All technical terms should be explained before the use of any shorting of the term.