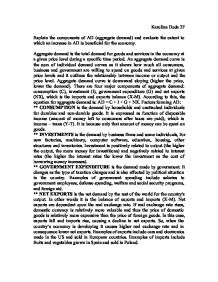 Components of aggregate demand and its benefits.

Karolina Duda 2F Explain the components of AD (aggregate demand) and evaluate the extent to which an increase in AD is beneficial for the economy. Aggregate demand is the total demand for goods and services in the economy at a given price level during a specific time period. An aggregate demand curve is the sum of individual demand curves as it shows how much all consumers, business and government are willing to spend on goods and services at given price levels and it outlines the relationship between income or output and the price level. Aggregate demand curve is downward sloping (higher the price, lower the demand). There are four major components of aggregate demand: consumption (C), investment (I), government expenditure (G) and net exports (NX), which is the imports and exports balance (X-M). ...read more.

Examples of government spending include salaries to government employees, defense spending, welfare and social security programs, and foreign aid. ** NET EXPORTS is the net demand by the rest of the world for the country's output. In other words it is the balance of exports and imports (X-M). Net exports are dependent upon the real exchange rate. If real exchange rate rises, domestic currency is relatively more valuable and thus the price of domestic goods is relatively more expensive than the price of foreign goods. In this case, exports fall and imports rise, causing a decline in net exports. So, when the country's economy is developing it causes higher real exchange rate and in consequence lower net exports. Examples of exports include cars and electronics made in the US and sold in European countries. ...read more.

output grows slightly in comparison to prices. In this case it is not still beneficial to economy because only prices rises so inflation grows (inflationary gap can be observed). On the other hand we've got classical approach, which focuses on supply side. All markets clear in long run and labour is like any other commodity and it rejects any interventions. In this case, increase in AD from AD1 to AD2 (see fig.2) causes SRAS1 to decrease to SRAS2 because market pursue to long run equilibrium at a full employment of factors of production. It can also cause the inflation to increase so it is not beneficial to the economy. Because of this increase in AD will be beneficial to the economy when LRAS shifts to the right (the efficiency of production will increase: new technologies will be introduced, labour will be more productive, market imperfections will be removed). To conclude increase in AD will cause benefits on different stages as it depends if the government intervene in the market or not. ...read more.

This question engages well with the first part of the question, explaining the components of aggregate demand. However, there is no clear discussion of the extent to which an increase in aggregate demand will be beneficial. I would note that ...

This question engages well with the first part of the question, explaining the components of aggregate demand. However, there is no clear discussion of the extent to which an increase in aggregate demand will be beneficial. I would note that is vital to stay on focus and answer the whole question, as a lot of the marks in Economics are for evaluation. This can be simply done by saying "it depends upon what stage of the aggregate demand curve the macroeconomic equilibrium is currently at", but of course it needs to be in more depth to gain higher marks.

The analysis in this essay is strong. The components of aggregate demand are explained, and I liked how they discussed the factors determining each component. It would've been nice to have seen some discussion of the multiplier effect, in which an increase in one component will result in a larger increase in aggregate demand. I was particularly pleased to show the appreciation of Keynesian and Classical approaches, and displaying such skills will gain credit. I would note that Keynesian is the preferred curve by exam boards, and drawing the Classical curve limits your analysis and evaluation. I presume that the diagrams have not transferred over, as they have analysed them in the following paragraph. I liked how they analysed the diagram rather than simply placing it in their essay, this is evident by mentioning changes from AD1 to AD2 and P1, etc. There is a lack in analysis though in terms of consequences beyond the price level and GDP from the diagrammatical analysis. They needed to mention employment increases, welfare increases or possibly development. The evaluation is slightly poor - there is mention of government intervention only in the conclusion. I would've liked this point to have been expanded, explaining why different levels of government intervention would have different consequences.

This essay is structured well, explaining the key terms and showing knowledge before analysing the changes in aggregate demand. Spelling, language and punctuation are strong throughout.