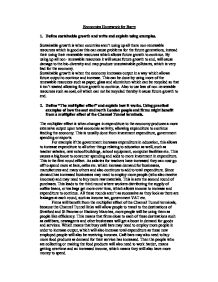 Define &quot;The multiplier effect&quot; and explain how it works. Using practical examples of how the east and north London people and firms might benefit from a multiplier effect of the Channel Tunnel terminals.

This causes a big boost to consumer spending and adds to more investment in expenditure. This is the first round effect. As salaries for teachers have increased they can now go off to spend more at bars, cafes etc. which increase demand for businesses, manufactures and many others and also continues to add to total expenditure. Since demand has increased businesses may need to employ more people (who also receive incomes) and may need to buy more raw materials. This is sets the second round of purchases. This leads to the third round where workers distributing the supply of coffee beans, or tea bags get more over time, which allows income to increase and expenditure to continue. ...read more.

Caf� bars may also need to buy more food products as demand for their service has increased. Then the people who are collecting or making the food products will also need to work harder, means getting overtime and an increased income, which means they will also have more money to spend. 3. Find a list of reasons to why the AS curve may shift outwards and argue how this would affect economic growth and the PPC. The AS curve may shift outwards due to improvements in the expectations of business men as demand has increased business men may be wanting to expand their businesses. Changes in technology will cause the AS curve to shift as most jobs are being done automatically by computers so number of manual workers will decrease, which may cause unemployment to rise. ?? ?? ?? ?? ...read more.

There are three questions being answered here: the first two are answered well, however the last lacks any real depth. There is plenty to talk about when referencing increases in aggregate supply, so it was a shame to see this ...

There are three questions being answered here: the first two are answered well, however the last lacks any real depth. There is plenty to talk about when referencing increases in aggregate supply, so it was a shame to see this area neglected. I would've liked to have seen some discussion of the circular flow of income when talking about the multiplier effect, or some analysis of how it's derived to gain the higher marks.

The analysis in this essay is sound. Sustainable growth is explained very well, and I liked how they picked up on the buzzword of "future generations". Whenever referencing sustainability in economics, talking about allowing future generations the same ability to grow and develop, or have the same standard of living, will gain credit. The explanation of the multiplier effect is good, but I would've liked the definition to be a bit more sharp. I would be saying "the multiplier effect is whereby an increase in a component of aggregate demand results in a larger increase in total aggregate demand". I would then go onto say that "the multiplier figure is the amount that the initial increase increases by". The explanation of the mechanism is strong, however, and shows a good understanding of the concept. If the essay wanted to go further, making a reference to marginal propensity to consume to derive the multiplier figure would've been good. It was a shame that the analysis of increases in aggregate supply was weak, as the rest of the essay has strong elements. I would've liked to have seen a diagram showing an increase in aggregate supply, then mentioning the effect on real GDP and thus inflation and employment depending on the former macroeconomic equilibrium.

This essay is structured well, and this is due to the clear subheadings. There are a few slips in grammar, punctuation and spelling such as "there" instead of "their" and a few sentences which don't make sense. I would advise a proof read to ensure these aren't submitted, as it detracts somewhat from the analysis.