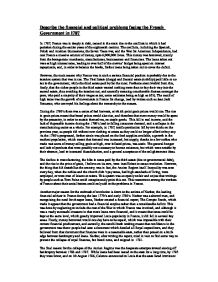 Describe the financial and political problems facing the French Government in 1787.

Describe the financial and political problems facing the French Government in 1787 In 1787, France was in deeply in debt, caused in the main due to the conflicts in which it had partaken during the earlier years of the eighteenth century. The conflicts, including the Spanish, Polish and Austrian Successions, the Seven Years war, and the War for American Independence, had cost France a massive amount of money, upto 6,000,000 livres. This money was borrowed, mainly from the bourgeoisie: merchants, manufacturers, businessmen and financiers. The loans taken out were at high interest rates, leading to over half of the crowns' budget being spent on interest repayments, and, in order to balance the books, further loans being taken out to cover the deficit. However, the main reason why France was in such a serious financial position is probably due to the taxation system that was in use. The First Estate (clergy) and Second estate (nobility) paid little or no tax to the government, while the third estate paid by far the most. ...read more.

As the 1780's progressed, further strain was placed on the food supplies available, a growth in the resident population, which meant that demand was increased, but supply, thanks to a few nobles who made vast sums of money selling grain at high, over inflated prices, was static. The general hunger and lack of products that were possibly not necessary to human existence, but which were notable by their absence, lead to increased dissatisfaction, and a general acceptance of the enlightenment ideas. The decline in manufacturing, the hike in taxes paid by the third estate (due to governmental debt), and the rise in the price of grain, I believe on its own, were insufficient to cause revolution. However, the thing that did destabilise the country, was in fact, the Ancien Regime itself. Inequality was seen every day, when the nobles and the church didn't pay taxes, had high standards of living, were employed, or were men of leisure et cetera. This system was so openly unfair and unjust that writings by people such as Tom Paine could conspicuously point this out. ...read more.

Necker, after writing the report, tried in vain to find some way to prevent the collapse of royal finances, but found none, and reigned in 1781. The final reason for the collapse of the Ancien Regime was the desperate attempts toward staving off bankruptcy between 1786 and 1787. While loans had been issued to the state for a long time, by 1785 they were fewer, and on 20 August 1786, Calonne announced to Louis that the state faced imminent financial collapse. Louis, reluctant to act, delayed, but finally realised that there was no way out: taxes must be raised, and that taxes could only be raised one way, by taxing the church and the nobles. Unfortunately, due to the Compte Rendu, they felt government finances were in better shape than they were, and also believed that the taxes proposed would infringe on their basic rights as nobles. This lead to the Nobles revolts in 1787, which although lacking concerted leadership, was timed perfectly: at the beginning of August, 1788, payments from the treasury ceased, and Louis was forced to call the Estates General. ...read more.