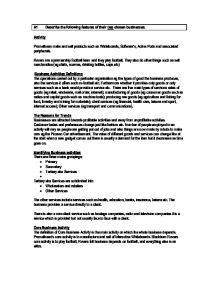 A1 Describe the following features of their two chosen businesses. Activity Promethean make and sell products such as Whiteboards, Software's, Active Pods and associated peripherals. Rovers are a premiership football team and they play football. They also do other things such as sell merchandise (eg shirts, scarves, drinking bottles, caps etc) Business Activities Definitions The operations carried out by a particular organisation eg the types of good the business produces, also the services it offers such as football etc. Furthermore whether it provides only goods or only services such as a bank would provide a service etc. There are five main types of services: sales of goods (eg retail, wholesale, mail order, internet); manufacturing of goods (eg consumer goods such as radios and capital goods such as machine tools); producing raw goods (eg agriculture and fishing for ...read more.

The business provides a service directly to a client. There is also a non-client service such as haulage companies, radio and television companies it is a service which is provided but not usually face to face with a client. Core Business Activity The definition of Core Business Activity is the main activity on which the whole business depends. Promethean's core activity is to manufacture and sell of Interactive Whiteboards. Blackburn Rovers core activity is to play football, Rovers full business depends on football, and everything else is an extra. Promethean Promethean is a secondary and tertiary businesses because they make and sell their products. The demands of customers for Interactive Whiteboards have changed over the years, for example, around 2001-2002 there was the odd classroom which had interactive whiteboards, but as time moved on there's a demand for interactive whiteboards because technology becomes more advanced. ...read more.

The number of people involved in Promethean has risen over the years as there is a higher demand on their products. Promethean have made a profit over time as customer demand increased. The UK benchmark for 2004 is �52m from the government to schools. Promethean got the majority from schools. There market shares are 40%, they are number 2 in the worldwide market. In 2002 Promethean won the Lancashire Evening Telegraph Business of the Year 2002, and Promethean also won the Queen's Award for Innovation 2003. Promethean were voted the Hottest UK Technology Prospect in the annual UK Technology Innovation and Growth Awards for 2005. More than 50 000 of Prometheans ACTIVboards are installed in classrooms around the world-sourced by Lancashire Evening Telegraph 2005. ?? ?? ?? ?? ...read more.