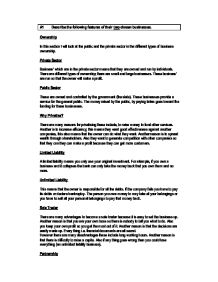 A1 Describe the following features of their two chosen businesses. Ownership In this section I will look at the public and the private sector in the different types of business ownership. Private Sector Business' which are in the private sector means that they are owned and run by individuals. There are different types of ownership; there are small and large businesses. These business' are run so that the owner will make a profit. Public Sector These are owned and controlled by the government (the state). These businesses provide a service for the general public. The money raised by the public, by paying taxes goes toward the funding for these businesses. Why Privatise? There are many reasons for privatising these include, to raise money to fund other services. Another is to increase efficiency; this means they want good effectiveness against another companies, this also means that the owner can do what they want. Another reason is to spread wealth through shareholders. Also they want to generate competition with other companies so that they can they can make a profit because they can get more customers. Limited Liability A limited liability means you only use your original investment. ...read more.

Can be a limited company therefore you only pay back what you own the bank (limited liability). Commitment this means that the workers are committed. Also you are not forced to be owners. However there are many disadvantages these include difficult to raise external finance (funds) from places such as banks. Slow decision making this means that it takes longer to make a decision as everyone has to have a say. Business decisions verses social beliefs this means that you can be against something but for the sake of the business you have to do it. Some people have a lack of business skill. Franchise This means a well known business will allow, 'sell' the right to trade under their name. For example Spar might give the right to a business man. There are many advantages these include high success rate. Help and support from the well known business. Fewer decisions to make as they are already made for you. Easier to raise a capita as you have the well known business's name. Protected by BFA code, the BFA code is the British Franchise Association it is good to have protection from them as they will raise a complaint for you and look it up and it stops you from misleading. ...read more.

There wasn't much money around so therefore football was a cheap activity as there was no official ground and the costs involved in the upkeep of a stadium thwaites were the sponsors then. There are many people who run Rovers. These are made up of 5 trustees who are given the responsibility of overseeing the running of the club after Jack Walker's death. The Jack walker trust is the major share holder since Jack Walker's death, they own 99.9%. The Walker family form part of the Board of directors. The other directors own the remaining 0.1%. Although Blackburn Rovers run the day to day activities they still have to report to the trustees. Tom Finn is the Managing Director responsible for most of the day to day operations of the club. The trust set annual budgets along with the Rovers Board. John Williams is the club Chairman responsible for football business and operations together with a focus on strategic schemes, including an appraisal of the opportunities for new investment into the club. David Brown is Vice Chairman who will provide a link to the shareholders. Robert Coar and Richard Matthewman are non-executive directors. The Vice Presidents are Iain Stanners, George Root, Keith Lee and Milton Jeffries. ?? ?? ?? ?? ...read more.