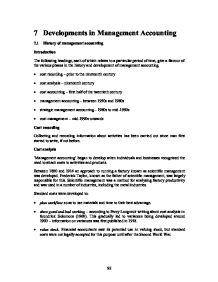 7 Developments in Management Accounting 7.1 History of management accounting Introduction The following headings, each of which relates to a particular period of time, give a flavour of the various phases in the history and development of management accounting. * cost recording - prior to the nineteenth century * cost analysis - nineteenth century * cost accounting - first half of the twentieth century * management accounting - between 1950s and 1980s * strategic management accounting - 1980s to mid-1990s * cost management - mid-1990s onwards Cost recording Collecting and recording information about activities has been carried out since man first started to write, if not before. Cost analysis 'Management accounting' began to develop when individuals and businesses recognised the need to attach costs to activities and products. Between 1880 and 1914 an approach to running a factory known as scientific management was developed. Frederick Taylor, known as the father of scientific management, was largely responsible for this. Scientific management was a method for analysing factory productivity and was used in a number of industries, including the metal industries. Standard costs were developed to: * plan workflow so as to use materials and time to their best advantage. * show good and bad working - according to Percy Longmuir writing about cost analysis in foundries: Solomons (1968). This gradually led to variances being developed around 1900 - information on variances was first published in 1918. ...read more.

Research also developed in the 1950s. It was developed in the UK by a group of physicists and mathematicians. By the 1960s and 1970s a number of operational research techniques had crept into use. * Mathematical models for optimising product mix with limiting or constraining factors. * Use of probability and decision theory for analysis of cost volume profit decisions under uncertainty. * Statistical models for instructing when to investigate variances. * Mathematical models used for spreading overheads, joint products, etc. * Regression analysis for separating and estimating fixed and variable costs. The behavioural side of management accounting began to be recognised for the first time. The words 'responsibility centres' were coined to refer to cost, revenue, profit or investment centres. A manager is accountable for the performance of each centre and when performance is measured the manager tends to act in his own self-interest. 1970s - Agency theory and zero-based budgeting The 1970s brought a new approach to the firm and to management accounting, which was called agency theory. It was argued that the interests of shareholders and managers diverge significantly from the behaviour of the entrepreneur-run firms of the neo-classical model. Zero-based budgeting was the other new technique of the 1970s. It is a technique that requires the organisation to budget from scratch each year and justify every single activity anew. Its main aim is to cut out the non-value added parts of the business that have proliferated due to bad management. ...read more.

The result is that efficient internal systems will not only impact on the company that installs them but on a number of other organisations linked in that industry. There are two main areas where a management accountant can help with e-commerce or e-business. The first is in providing expertise in making sure that the structural and financial needs to support e-trading are in place. The second area where a management accountant can assist with e-trading is in project appraisal. Risk, uncertainty, intangible costs and benefits all have to be estimated with a reasonable degree of accuracy. * Management accounting techniques and systems Budgeting is one of the traditional areas of management accounting that has been much discussed and criticised in recent years. Controversy still surrounds some of the 'accepted' techniques, as well as newer approaches and ideas. The arguments over whether to relate non-volume related costs or fixed costs to products is as strong as ever but its focus has now changed to ABC. 7.3 The distinction between management and financial accounting The development of management accounting during the twentieth century was heavily influenced by financial accounting requirements i.e. keeping records to produce data for published accounts. Long after the need for this influence had disappeared due to the development of modern information systems it still remained, providing a strong financial accounting slant to the management accounting ratios and measures used in the UK and USA. 1 93 ...read more.