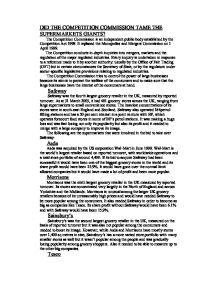 Did the Competition Commission Tame the supermarket giants?

DID THE COMPETITION COMMISSION TAME THE SUPERMARKETS GIANTS?

The Competition conducts in-depth inquiries into mergers, markets and the regulation of the major regulated industries. Every inquiry is undertaken in response to a reference made to it by another authority: usually by the Office of Fair Trading (OFT) but in certain circumstances the Secretary of State, or by the regulators under sector-specific legislative provisions relating to regulated industries.

Safeway was the fourth largest grocery retailer in the UK, measured by reported turnover. As at 31 March 2003, it had 481 grocery stores across the UK, ranging from large supermarkets to small convenience stores. The heaviest concentrations of its stores were in south-east England and Scotland. Safeway also operated 184petrol filling stations and has a 50 per cent interest in a joint venture with BP, which operates forecourt food stores in some of BP’s petrol stations. It was making a huge loss and was fast losing not only its popularity but also its profit and it needed to merge with a large company to improve its image.

The following are the supermarkets that were involved in the bid to take over Safeway:

Asda was acquired by the US corporation Wal-Mart in June 1999. Wal-Mart is the world’s largest retailer based on reported turnover, with worldwide operations and a total store portfolio of around 4,400. If its bid to acquire Safeway had been successful it would have been one of the biggest grocery stores in the world and its share profit would have been 25.9%. It would have gone over the normal limit allowed companies but it would have made a lot of profit and been more popular.

Morrisons was the sixth largest grocery retailer in the UK measured by reported turnover. Its stores are concentrated very largely in the North of England and across Yorkshire and the Midlands. Morrisons is unusual among the larger UK grocery retailers because of its unreasonably high prices and would have needed Safeway to be more popular among the consumers. It also needed Safeway in order to become as big as companies like Tesco. Its share profit without Safeway would have been 6.1% and with Safeway would have been 15.9%.

Sainsbury’s was the second largest grocery retailer in the UK, measured on the basis of reported turnover but it was also not popular among the consumers and needed to boost its image. However, while Asda and Morrisons have mostly stores over 1,400 sq metres in size, Sainsbury’s has a more varied store portfolio with many smaller stores as well but it wasn’t popular among the people and was gradually losing popularity among grocery shoppers. Also it needed to be able to measure up to the other big companies.

Tesco is the largest grocery retailer in the UK, measured by reported turnover, and had 779 stores with an average sales area of about 2,800 sq metres. Tesco has operations in ten countries across Europe and Asia. They only wanted Safeway because they wanted to stop others getting it and their share profit was already 25.8%.

There was a minor party known as Trackdean owned by Philip Green and his family. Philip Green was the billionaire owner of BHS and Top shop. He had little experience in food retailing but managed to rescue BHS from its frumpy image and turned it back into one of the nations staple clothing suppliers. He dropped the battle over Safeway.

The 25% rule is basically a business rule which states that if a company’s share goes over 25% it is likely to be investigated by the Competition Commission and the Commission will not allow a merger with that company. This rule is used because it helps to make sure that companies do not become too powerful. The only company’s that would have gone over the 25% rule were Sainsbury’s, Asda and Tesco.

The supermarket that was finally allowed to takeover Safeway was Morrisons and it had to sell 53 stores before being allowed to take over Safeway in order to prevent concentration of stores in areas where there had been a Safeway store and a Morrison store. This was done to ensure that the consumers still had a choice.

The other supermarkets were stopped because the Commission felt that the acquisition of Safeway by any one of them would have resulted in prices in the one-stop grocery market be higher than the normal case, further general weakening of some suppliers’ positions and some  companies like Sainsbury’s won’t have been able to manage Safeway. Also levels of investments in new products or manufacturing techniques will tend to be lower or slower than would otherwise have been the case.

It can be concluded that the Competition Commission tamed the giants because by allowing Morrisons takeover Safeway and not one of the big supermarkets they proved that ability not size is a reason for considering mergers. They also had the interest of the consumers at hand by not choosing one of the other big supermarkets who would probably have abused their power or not be able to cope with Safeway. Also not all the big stores where really interested in buying Safeway, they were mainly interested in publicity and in competition (trying to stop other companies from getting it).