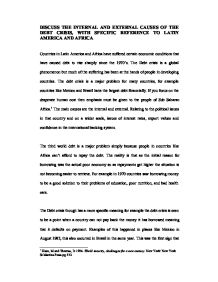 Discuss the internal and external causes of the debt crisis, with specific reference to latin America and Africa

DISCUSS THE INTERNAL AND EXTERNAL CAUSES OF THE DEBT CRISIS, WITH SPECIFIC REFERENCE TO LATIN AMERICA AND AFRICA Countries in Latin America and Africa have suffered certain economic conditions that have caused debt to rise sharply since the 1970's. The Debt crisis is a global phenomenon but much of the suffering has been at the hands of people in developing countries. The debt crisis is a major problem for many countries, for example countries like Mexico and Brazil have the largest debt financially. If you focus on the desperate human cost then emphasis must be given to the people of Sub Saharan Africa.1 The main causes are the internal and external. Relating to the political issues in that country and on a wider scale, issues of interest rates, export values and confidence in the international banking system. The third world debt is a major problem simply because people in countries like Africa can't afford to repay the debt. The reality is that as the initial reason for borrowing was the actual poor economy so as repayments get higher the situation is not becoming easier to retrieve. For example in 1970 countries saw borrowing money to be a good solution to their problems of education, poor nutrition, and bad health care. ...read more.

The collapse of the IMF resulted in the more Market orientated solutions, which still let countries like the US would have a major say. These more Market orientated options as mentioned before are western banks and they tried to take the place of the IMF and resolve the recycling process. There was though a more collective problem with this and it had a large external effect on the LDC's. The Credit rationing system employed by most banks lacked proper co-ordination. So at first (1970's) they could decide which countries would be lent more or les via their importing or exporting oil. By the 1980's they were lending the same amounts to a number of countries but mainly due to the fact that competition between international banks hit a high in this period. This meant again that banks lending rules were relaxed and LDC's could borrow more money as the banks saw the risks of lending as being less of a factor than losing market share in the international markets. This created a major problem when the debt crisis occurred when in places like Mexico defaulted on payments. Banks then opted out of lending, meaning the LDC's found it hard to raise capital this had knock on effects. ...read more.