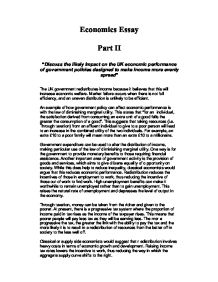 Economics Essay Part II "Discuss the likely impact on the UK economic performance of government policies designed to make income more evenly spread" The UK government redistributes income because it believes that this will increase economic welfare. Market failure occurs when there is not full efficiency, and an uneven distribution is unlikely to be efficient. An example of how government policy can affect economic performance is with the law of diminishing marginal utility. This states that "for an individual, the satisfaction derived from consuming an extra unit of a good falls the greater the consumption of a good". This suggests that taking resources (i.e. Through taxation) from an affluent individual to give to a poor person will lead to an increase in the combined utility of the two individuals. For example, an extra �10 to a poor family will mean more than an extra �10 to a millionaire. ...read more.

At present, there is a progressive tax system where the proportion of income paid in tax rises as the income of the taxpayer rises. This means that poorer people will pay less tax as they will be earning less. The more progressive the tax, the greater the link with the ability to pay the tax and the more likely it is to result in a redistribution of resources from the better off in society to the less well off. Classical or supply side economists would suggest that redistribution involves heavy costs in terms of economic growth and development. Raising income tax rates lowers the incentive to work, thus reducing the way in which the aggregate supply curve shifts to the right. There are other ways in which, as the government tries to make the country more equitable, the economic performance of the UK is reduced. ...read more.

Free market economists argue that the costs of government intervention are very large. If there is little intervention, the poor may lose out because there is little in the way of state benefits, but they will be more than compensated through increase economic growth. The wealth generated by the better off in society will trickle down to the less fortunate. For example, the poor would be better off receiving 10 percent of a 'national cake' of �20bn, than 15 percent of a cake of only �10bn. This could be the case for many employed people but there would be no mechanism apart from charity in a free market for groups such as the handicapped, the sick and the elderly to benefit from increased prosperity enjoyed by the rest of society. Therefore, government policy designed to make the spread of income more even are often very necessary, but as described previously can have a negative affect on the economic performance of the UK. ?? ?? ?? ?? ...read more.

This essay responds to the question superbly, offering a number of policies to improve income inequality then discussing what effect this will have on microeconomic performance. I was particularly pleased to see an awareness of alternative interpretations, then coming to ...

This essay responds to the question superbly, offering a number of policies to improve income inequality then discussing what effect this will have on microeconomic performance. I was particularly pleased to see an awareness of alternative interpretations, then coming to a justified judgement. Such skills will gain top marks in Economics essays.

The analysis in this essay is strong, with difficult concepts being used well. I do have a small query with saying "An example of how government policy can affect economic performance is with the law of diminishing marginal utility" as the government doesn't use the law of diminishing marginal utility, but the concept gives a positive reason for a progressive taxation and benefits system. I was impressed to see the Classical argument discussed, but they could make the argument slightly clearer. Simply saying that "redistributing disrupts free market mechanisms, thus making the national economy less efficiency" would represent the Classical view well. A good range of policies are analysed, and I like how the essay explains each step of the mechanism. There should be some evaluation of the extent to which the policies are successful in reducing income inequality, for example making reference to the amount of government expenditure or the size of tax increases. I would note that when making reference to national minimum wages or taxation, you should always talk about increases in these, rather than introductions. If this essay wanted to explore the concept further, the Gini coefficient and Lorenz curve would've made numerical analysis slightly easier. The conclusion needed to be slightly stronger, drawing upon the points made and making a justified judgement. Phrases such s "it depends greatly upon" would've made this stronger.

This essay is structured well having a clear introduction and conclusion. I would've liked to have seen a diagram, as this shows more analytical skills. Each paragraph adds something to the argument, which is nice to see for a change! Too often in Economics essays do people go off onto a tangent thinking it adds to their argument, when in fact it loses them marks for going off focus. Spelling, punctuation and grammar are strong and the style allows for a convincing argument.