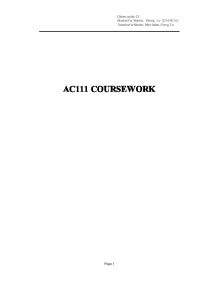 Discuss the need for regulation in financial reporting.

AC111 COURSEWORK 1. Discuss the need for regulation in financial reporting. Discuss: Since 1990 the Accounting Standards Board has produced Financial Reporting Standards (FRSs),It has been performing a very important role in the economics market as the published accounts are the essential sources of information about the organizations' performance which is available of the both internal and external user group in large organizations. * Financial Reporting Regulations in UK Regulators that establish requirements for the reporting of financial results have recently issued several new initiatives targeted at the practices of many firms. The creation of regulations for financial reporting in the UK combine both legislative authority and the work of private organizations. The issuing organizations and their responsibilities are discussed below and represented in Table 1. The UK Companies Act of 1985, and amended in 1989, requires firms to provide financial statements that comply with 'accounting standards' and disclose any departures from those standards along with the accompanying reasons. Departures should only be made when they are necessary to provide a 'true and fair view' of the underlying transactions of the firm. In 1990, a system for developing standards was created which included an independent standard-setting board and an oversight board, the Accounting Standards Board (ASB) ...read more.

The principal sources of such regulation are the law and the accountancy profession. (1) The Law The companies Act 1985 is essentially a consolidation of law which had previously been included in the older versions. The companies Act 1989's accounting provisions are substitutions for, and amendments to , the Companies Act 1985. All financial statements drawn up under the Act must present a true and fair view. The requirement is fundamental and overrides all the detailed rules on content and format of financial statements. The Act provides a framework for general disclosure that resolve some of the problems associated with the asymmetry of information between the directors and some user groups by requiring that certain financial statements should be prepared and presented to the shareholders, and requires the specific disclosure of certain items. They also enable user groups to compare the level of their inducements with those received by other groups. The Act requires that the directors are not only present the financial statements to the shareholders each year at a general meeting, but also that independent auditors are appointed who will examine the financial statements and report their findings to the shareholders. ...read more.

The UITF provisions require that barter transactions only be formally recognised when the advertising would have been sold for cash if it had not been exchanged. A company has evidence that the space could have been sold for cash when it has a history of selling similar space for cash, and when substantially all other advertising revenues for the period are from cash sales. Both the EITF and UITF call for disclosure in the notes to the financial statements of barter transactions recorded in current revenues and other barter transactions that were not recorded. Therefore, fewer barter transactions can be recorded as revenues and investors must be clearly informed about the barter transactions. * Other sources of regulation in the UK Accounting standards together with the companies Acts 1985 and 1989 contain most of the regulations governing company financial reporting in the UK. However, some companies must also comply with regulations laid down in other legislation. Thus, companies must comply with the accounting requirements set out in the International Stock Exchange's Continuing Obligations in order to help their shares to be listed on the International Stock Exchange of the UK and Republic of Ireland, Summary From all the above , we can see that the importance of the regulations of finance reporting and it has be consummating constantly as required. ...read more.