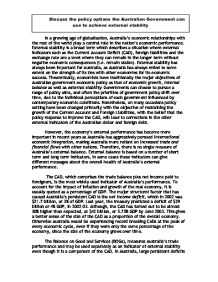 In a growing age of globalisation, Australia's economic relationships with the rest of the world play a central role in the nation's economic performance. External stability is a broad term which describes a situation where external indicators such as the Current Account Deficit (CAD), foreign liabilities and the exchange rate are a level where they can remain in the longer term without negative economic consequences (i.e. remain stable). External stability has always been important for Australia, as Australia has always relied to some extent on the strength of its ties with other economies for its economic success. Theoretically, economists have traditionally the major objectives of Australian government economic policy as that of economic growth, internal balance as well as external stability. Governments can choose to pursue a range of policy aims, and often the priorities of government policy shift over time, due to the individual perceptions of each government influenced by contemporary economic conditions. Nonetheless, on many occasions policy setting have been changed primarily with the objective of restraining the growth of the Current Account and Foreign Liabilities, with the belief that the policy response to improve the CAD, will lead to corrections in the other external indicators of the Australian dollar and foreign debt. However, the economy's external performance has become more important in recent years as Australia has aggressively pursued international economic integration, making Australia more reliant on increased trade and financial flows with other nations. Therefore, there is no single measure of Australia's external balance. External balance is based on a number of short term and long term indicators, in some cases these indicators can give different messages about the overall health of Australia's external performance. The CAD, which comprises the trade balance plus net income paid to foreigners, is the most widely used indicator of Australia's performance. To account for the impact of inflation and growth of the real economy, it is usually quoted as a percentage of GDP. ...read more.

There are two possible instruments for conducting monetary policy; one involves the RBA controlling the growth of money supply in the economy through its control over the money base, which is the hands of the public and deposits of banks and other financial institutions, better known as monetary targeting. However this has been abandoned since the deregulation of financial markets. The RBA now attempts to influence the level of interest rates in the economy by setting a short-run such as the cash rate. The RBA does not directly control or regulate the market interest rates, since the deregulation of the financial sector. The RBA attempts to set short term interest rates, known as the cash rate which is currently targeted at 4.75%. The main instrument of monetary policy in Australia at the moment is the use of Domestic Market Operations (DMO), which is designed to influence the level of interest rates in the economy. The RBA does not affect the level of interest rates directly, but it's actions influence market interest rates, assisting in achieving its objectives relating to the level of economic activity, inflation and unemployment. The implementation of DMO, involves the purchase or sale of second hand, (privately issued) government securities, which are Treasury notes and bonds by the RBA, in an attempt to influence the interest rates, which will influence the level of spending and aggregate demand, affecting demand for money in the economy. Through exchange settlement accounts, the RBA conducts DMO directly with banks and many major Non Bank Financial Institutions (NBFI). To influence, the supply of funds, and thus the cash rate, by buying or selling second hand government securities in the short term money market to the financial institutions. It is through this process the RBA creates a shortage or an excess of funds in the short term money market. If the Monetary policy is loosened, the RBA buy second hand government securities from the banks NBFIs, this would create surplus funds and excess liquidity, forcing a downward pressure on Interest rates. ...read more.

For instance, the creation of a Strategic Investment Coordinator to attract overseas investment projects was a key part of these reforms in 1997. The position is now all but ignored, and nobody has been appointed to this role since it fell in July 2002. Assessing the effectiveness of the Government's approach to external stability in Australia is difficult. Improvements in long-term external problems take time, and it is important to view the longer term trends rather than focusing on short term peaks and troughs in the CAD. Little doubt exists that external balance is still a problem. In the decade of 2002, Australia's CAD averaged 4.2% of GDP, well above what is regarded as a sustainable range. For instance, research conducted by the OECD suggests that the sustainable range for CADs is just 2-3%. And while there has been some improvement in a longer term sense, this seems to be much of the result of exceptionally low global interest rates and competitive exchange rate as it indicates Australia's economic fundamentals. Due to the stabilization of NFL and the return of the Australian exchange rate to its post float average (yet the influence of government policy in both of these areas has been more limited). To the extent that the RBA is able to influence short term exchange rate volatility, it has appeared to have some successes. For example a 2003 RBA research paper found the RBA's defence of the Australian dollar in March 2001 to be a success - with the $3.6 billion purchase of Australian dollars dragging the exchange arte up fro its record low of US47.75 cents. The report by Jonathan Learns and Roberto Rigobon estimated that a $158 million purchase of dollars caused an 1.3-1.8% currency appreciation, suggesting that the RBA's exchange rate policy of 'leaning against the wind' can be successful during a period when the currency is under pressure. However, the RBA can have little influence on the exchange rate in the medium to longer term. ...read more.