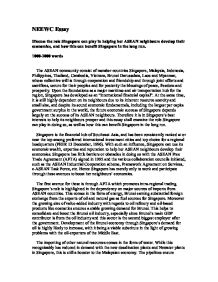 Discuss the role Singapore can play in helping her ASEAN neighbours develop their economies, and how this can benefit Singapore in the long run.

NEEWC Essay Discuss the role Singapore can play in helping her ASEAN neighbours develop their economies, and how this can benefit Singapore in the long run. 1000-2000 words The ASEAN community consist of member countries Singapore, Malaysia, Indonesia, Philippines, Thailand, Cambodia, Vietnam, Brunei Darussalam, Laos and Myanmar, whose collective will is through cooperation and friendship and through joint efforts and sacrifices, secure for their peoples and for posterity the blessings of peace, freedom and prosperity. Upon the foundations as a major maritime and air transportation hub for the region, Singapore has developed as an "international financial capital". At the same time, it is still highly dependent on its neighbours due to its inherent resource scarcity and small size, and despite its sound economic fundamentals, including the largest per capita government surplus in the world, the future economic success of Singapore depends largely on the success of its ASEAN neighbours. Therefore it is in Singapore's best interests to help its neighbours prosper and this essay shall examine the role Singapore can play in doing so, as well as how this can benefit Singapore in the long run. Singapore is the financial hub of Southeast Asia, and has been consistently ranked at or near the top among preferred international investment cities and top choice for a regional headquarters (FEER 13 December, 1996). With such an influence, Singapore can use its economic wealth, expertise and reputation to help her ASEAN neighbours develop their economies. Singapore has little barriers or obstacles in doing so with the ASEAN Free Trade Agreement (AFTA) ...read more.

More importantly, the transfer of knowledge and expertise is a catalyst to boost their economies. Singapore entrepreneurs pump in much needed funds to these countries to jump start their economies. Singapore has also spearheaded the initiative to develop a regional e-hub and promote information technology assimilation. Hence this would increase the economies of scale within the region and provide the base for economic growth. Finally one other major role that Singapore has undertaken is the Tourism Unlimited aspect in the Tourism21 blueprint. This highlights the strategic placement of Singapore in a "borderless" Southeast Asia which offers great opportunity in the region. The World Trade Organisation statistics have shown the ASEAN region to be the fastest growing in the world, in terms of international tourist arrivals for the past decade (WTO2000). Hence establishing Singapore as the "hub" or "gateway" for ASEAN region travel is a win-win situation for the region. This is particularly since Singapore is a world renown city and therefore a very apt "advertisement" or representative of the region, encompassing the "sun, sand and sea" appeal that is consistent with the region, as well as promoting world class attractions full of heritage, cultural and historical flavour, with a tinge of post-colonial touch to it. With the remarkable reputation of Singapore and the efficient and world-class transport infrastructure, characterized by the Changi Airport with 3 terminals, long haul tourists would flock to the region, using Singapore as the "base of operations". The linkages in the region hence become a enticing factor as a multi-dimensional experience, resulting in overall increased inbound tourists to the ASEAN region. ...read more.

This would be beneficial to Singapore especially with an ageing population and a shrinking workforce, the problem of labour shortage can be solved with the creation of businesses in these countries. This reduces the threat of competition but rather encourages growth of both economies, creating jobs for the host country and also business opportunities for Singaporeans at home. One example is the joint venture between Singapore, Johor and Riau Island-the SIJORI resorts which allowed Singapore to bring in their expertise to complement the other two parties. More of such partnerships will be possible and profitable due to the removal of restrictions between ASEAN member countries. In the long run, such developments between countries are also desirable because they help strengthen political relationships as well since the countries are now binded by economic ties. Thus, we can expect political stability within the region since it would not do any party any good if there were to be any political upheavals that might threaten to disrupt our development. In conclusion, the development of the other ASEAN economies benefits Singapore greatly as it creates endless opportunities and opens up new markets and generates employment that tap on the managerial and administrative expertise of Singapore. Strong regional economic performance is definitely desirable for Singapore as it promises a vibrant economy and prevents our economy from stagnating. It also gives foreign investors greater confidence in Singapore and gives us brighter economic prospects. Singapore will also prosper in helping these economies develop because of the business opportunities that they present. ...read more.