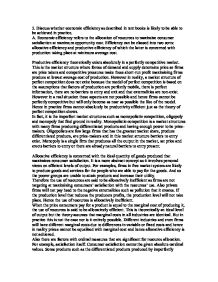 2. Discuss whether economic efficiency as described in text books is likely to be able to be achieved in practice. A. Economic efficiency refers to the allocation of resources to maximize consumer satisfaction at maximum opportunity cost. Efficiency can be classed into two sorts: allocative efficiency and productive efficiency of which the latter is concerned with production taking place at minimum average cost. Productive efficiency theoretically exists absolutely in a perfectly competitive market. This is the market structure where forces of demand and supply determine price so firms are price takers and competitive pressures make these short-run profit maximizing firms produce at lowest average cost of production. However in reality, a market structure of perfect competition does not exist because the model of perfect competition is based on the assumptions that factors of production are perfectly mobile, there is perfect information, there are no barriers to entry and exit and that externalities are non-exist. However in a real situation these aspects are not possible and hence firms cannot be perfectly competitive but will only become as near as possible the like of the model. ...read more.

When the price consumers pay for a product is equal to the marginal cost of producing it, the use of resources is said to be allocatively efficient. This is theoretically an ideal level of output but the theory assumes that marginal costs in all industries are identical. But in practice this is not the case nor is it entirely possible. Different industries and even firms will have different marginal costs due to differences in variable or fixed costs and hence in reality prices cannot be equalized with marginal cost and hence allocative efficiency is not achieved. Also there are factors with ordinal measures that are significant for resource allocation. For example, satisfaction itself. Consumer satisfaction cannot be given absolute cardinal values. Some products such as the differentiated products produced by imperfectly competitive firms can give 'upon consumers' tastes and preferences. Therefore consumers value variety and the price that they pay, which exceeds the marginal cost of producing it, could well reflect this value (even if the value is not a fixed number). ...read more.

For example, the soft-drink brand coca-cola is estimated to be the world's largest producer and the product is believed to be most consumed globally. The success was due to the company's successful advertising and introduction of the product even to the remote areas via vending machines. Consumer's satisfaction worldwide is increased by producing the drink and hence it can be argued that all resources are being allocated to this industry efficiently. But existence of basic needs unfulfilled around the globe and the potential health risks by consuming the soft drink as well as the increased pollution due to disposal of the number of cans and bottles would indicate that resources are inefficiently being allocated to this industry. Hence there exists allocative inefficiency. Scarce resources have alternative uses. Almost every use involves a number of complex costs and benefits to the society. The proper use of the resources is difficult to evaluate due to the existence of conflicts, different interests and ethical issues. Economic efficiency itself as described in text books carry assumptions that may not be entirely possible but this largely depends on how the people concerned view efficiency. ...read more.