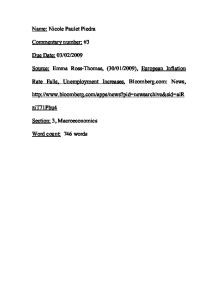 This article talks about a recent increase in the rate of unemployment in the Euro-zone countries due to the fall of the rate of inflation, which was caused by a decrease in the oil and commodity prices. In this commentary, I will analyze the relationship between these two economic problems, discuss their effects and evaluate the possible solutions.

Europe’s inflation dropped from 1.6% to 1.1% in the last two months. According to economic theory, such a fall in the general price level (PL) is not ideal because it limits economic growth. In this case, the decrease of inflation rate is caused by a raise in the short run aggregate supply (SRAS) due to the fall of the oil and commodity prices. This also reduces the consumer’s price expectations, therefore decreasing aggregate demand (AD). [See graphs]

The effects of this situation are double-sided. The fall in the European inflation rate will hurt people with variable incomes, and benefit people with fixed incomes. Due to the increase in the purchasing power of money, it will hurt borrowers and benefit lenders. As the value of money rises, savings will become more productive; however, it will cause a fall in expectations that reduces investment in the stock market. Finally, it will discourage the creation of new ventures; although, it will prevent future capital flight.

In addition to these effects, inflation provokes unemployment. The European Central Bank (ECB) has reported that its unemployment rate rose from 7.9% to 8% in December, as inflation decreased. In the European Union, anyone 15 years of age or older who is not working but available for work and actively looking for one is considered unemployed. This type of unemployment is classified as cyclical because it varies with the business cycle.

In order to understand better how unemployment relates to inflation, the economist A.W. Phillips did several studies showing that there is a trade-off between them. As inflation increases, people have more money in their hands. This will encourage the government to increase its spending, hence creating new jobs. Phillips designed a curve (PC) that portrayed the relationship between these contradictory macroeconomic goals. [See graph]

Increasing unemployment has the following economic and social costs:

From the PC, it can be concluded that a higher inflation will decrease the rate of unemployment in the EU. This, according to the article, will be attempted by the ECB through the implementation of discretionary expansionary monetary policy, which consists in a raise in money supply and a decrease in interest rate, to increase AD and lower SRAS. This is a policy taken from the Neo-Keynesian macro-model that believes in interventionism and short run measures to prevent deflation. [See graph]

One of the strengths of monetary policy is the short recognition, decision and execution lags. According to economists Mendel Gordon and Milton Freedman, they vary from 5-10 months and 6-24 months, respectively. One of its weaknesses, identified by Neo-Keynesian fiscal activists, is the weak links between banks and borrowers. This means that, regardless the interest rate changes, expectations remain unchanged. Fiscal activists also believe that monetary policy works indirectly and, thus, more slowly; however, monetary activists claim that it is not slower than fiscal policy.

Finally, monetary policy would succeed in increasing the rate of inflation, although it is limited by cash leakages and volt cash. Moreover, Milton Freedman affirms that it may destabilize the economy because of insufficient information. Consequently, it is better to follow the K% rule which consists in the establishment of a constant money growth rate determined by the Central Bank.