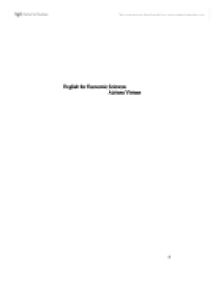 English for Economic Sciences Adriana Vintean Communication is essential to life and imperative if business is to prosper and survive in a competitive environment. It can be: Verbal - the written word Oral - the spoken word Visual - the illustration Numerical - the written and interpreted number Electronic - using a computer Communication should be received and understood so we must ask ourselves not what we want but what the audience wants. The term communication skills covers a number of defferent areas, including: -speaking clearly, fluently, convincigly. -understanding and responding to non verbal communication(body language). -Producing effective written communications, including briefs and presentations. In business life it' s important not only to be efficient and do your job but also to look and sound friendly, confident, sincere and helpful. Poor communication is the cause of all breakdowns in business relationships. When they try to communicate people go through different stages and the lack of care at any of them lead to confusion and wasted time and energy. 1.The need or desire to communicate with someone else- aiming. 2.The translation of internal thoughts and feelings into an external means of transmitting them as a coherent message- encoding. 3.The transmission of the message(spoken, pictorial, written, body language, tone of voice, timing)- transmitting. 4.The reception of the message(how and why people listen)-receiving 5.The translation of the message to internal thoughts and feelings on the part of the receiver-decoding. 6.The need or desire to respond to the message that has been sent(thinking, feeling, planning internally, setting objectives)-responding. A successful communication is meant to beware that the meaning of the message is the responsibility of the sender first. Having decided what it is that you need to communicate and whom you are going to communicate with, you then need to consider the impact the information will have- will it alarm people, will it make them more efficient, irritable, more comfortable, resentful, dafer, happier, bored, more productive, better informed, more motivated, more loyal? ...read more.

The first two ways are variable and are adjusted periodically to reflect movements in interest rates on the market. They may also be negotiable. The third may be dangerous for the bank when market rates are erratic. A company involved in a business where income and expenditure are subject to constant changes needs a variable borrowing facility. This is met most simply by an overdraft facility. The company opens an account with the bank, and an overdraft with a specified limit is granted on the account. Many companies make a profit not only from the goods or services which they sell, but also from the money that they have. Cash managers utilize funds at their disposal, buying and selling shares, treasury bills and so on, to generate profit in the form of investment income. Rather than move valuable foreign shares and securities around the world by post, a company will deposit them for safe keeping with a bank in the foreign country. A company in Sweden which buys shares on the American market, for example, will use the custodian services of a US bank. Banks naturally charge fees and/or commissions for custodian services. TEXT 8 Presenter: Simon Stillman meets Oliver Richardson . Simon: Could we take up the question of the interest rate charged for this overdraft facility? Oliver: Yes, of course. Simon: It seems to be rather high: one per cent over Wallers base rate. First of all, what is the base rate? Oliver: It's our basic lending rate which at the moment is eleven per cent. Simon: Yes, I see. It's more or less the overnight rate, then, as I understand it, your base rate. Oliver: Yes. Simon: But a mark-up of one per cent seems rather high. As you know, we work with a lot of banks, and, quite frankly, one per cent is just too expensive for us. Oliver: Yes, I see. ...read more.

As a result it becomes ever more difficult for interest groups, whether labour unions, farmers' organizations, commercial or industrial associations, ethnic leadership groups, or even criminal syndicates, to "deliver the vote." The extent to which "deviant voting" occurs depends partly on the degree of rigidity in the social structure. In countries where caste or class barriers are high or where traditional social, economic, religious, or regional cleavages remain strong, deviant voting is less likely than in countries where social mobility is possible and where political conflicts cut across traditional social cleavages. In Western nations the increasing difficulties of labour, farm, religious, or ethnic leaders in influencing the voter attests to the success that secret voting seems to have had on freeing the individual from electoral bondage to his traditional or economic affiliations. Balloting. The ballot makes secret voting possible. Its initial use seems to have been a means to reduce irregularities and deception in elections. This objective, however, could be achieved only if the ballot was not supplied by the voter himself, as was the case in much early voting by secret ballot, or by political parties, as is still the case in some countries. Ballot procedures differ widely, ranging from marking the names of preferred candidates to crossing out those not preferred or writing in the names of persons who are not formal candidates. Ballots also differ according to the type of voting system employed. Where plurality or majority voting is practiced, most elections employ classified ballots whereby the voter casts his vote for only one candidate or list of candidates. Where proportional methods are used, election is by ballots that enable the voter to rank the candidates according to his preferences. Though evidence is hard to come by, it is commonly believed that the nature of the ballot influences the voter's choice. In jurisdictions where electors are called upon to vote not only for higher offices but also for a multitude of local positions and where, in addition, the election may include propositions in the nature of referenda, the length of the ballot seems to be a factor affecting vote outcomes. ...read more.