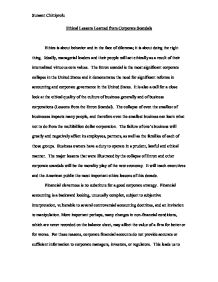 Ethical Lessons Learned from Corporate Scandals Ethics is about behavior and in the face of dilemma; it is about doing the right thing. Ideally, managerial leaders and their people will act ethically as a result of their internalized virtuous core values. The Enron scandal is the most significant corporate collapse in the United States and it demonstrates the need for significant reforms in accounting and corporate governance in the United States. It is also a call for a close look at the ethical quality of the culture of business generally and of business corporations (Lessons from the Enron Scandal). The collapse of even the smallest of businesses impacts many people, and therefore even the smallest business can learn what not to do from the multibillion dollar corporation. The failure of one's business will greatly and negatively affect its employees, partners, as well as the families of each of those groups. ...read more.

The most important lesson of the Enron collapse is that every link in the audit chain including: the audit committee and the board, the independent public auditor, the bankers and lawyers that aided and abetted the misrepresentation of Enron's financial condition, the credit-rating agencies, and the Securities and Exchange Commission failed to deter, detect, and correct the conditions that led to that collapse. Although not a part of the formal audit chain, most of the market specialists in Enron stock and the business press were also late in recognizing Enron's financial weakness (Corporate Aftershocks 12). Moreover, this is a characteristic pattern in many other bankruptcies. This leads us to recommend that most of the audit functions be assigned to the stock exchanges, the only institution with the potential to capture the third-party benefits of a good audit. ...read more.

tax rate on corporate income is now among the highest of the industrial nations. Our tax system, much like the Generally Accepted Accounting Principles (GAAP) and for much the same reasons, is extraordinarily complex, inviting attention to the many types of legal tax shelters used by Enron (Enron Lessons). Those characteristics of the current tax system lead me to recommend that the $1 million limit on the deductibility of salary and bonus be repealed and that the corporate income tax be replaced by a broad-based tax on the net cash flow of all non-financial corporations. The corporate scandals illustrated by the Enron collapse was a serious problem, undermining trust in the accounts and the behavior of all corporations and the political support for free-market policies. Executives who are highly paid can think they are above the rules and can be tempted to cut ethical corners to retain their wealth and perquisites. Government regulations and rules need to be updated for the new economy, not relaxed and eliminated. ...read more.