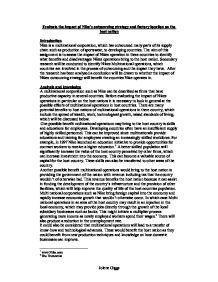 Evaluate the impact of Nike's outsourcing strategy and factory location on the host nation Introduction Nike is a multinational corporation, which has outsourced many parts of its supply chain such as production of sportswear, to developing countries. The aim of this assignment is to assess the impact of Nikes operation in these countries to identify what benefits and disadvantages Nikes operations bring to the host nation. Secondary research will be conducted to identify Nikes Multinational operations, which countries are involved in the process of outsourcing and the impact they have. After the research has been analysed a conclusion will be drawn to whether the impact of Nikes outsourcing strategy will benefit the countries Nike operates in. Analysis and knowledge A multinational corporation such as Nike can be described as firms that have productive capacity in several countries. Before evaluating the impact of Nikes operations in particular on the host nations it is necessary to look in general at the possible effects of multinational operations in host countries. There are many potential benefits to host nations of multinational operations in there country, which include the spread of wealth, work, technological growth, raised standards of living; which will be discussed below. One possible benefit multinational operations may bring to the host country is skills and educations for employees. Developing countries often have an insufficient supply of highly skilled personnel. This can be improved since multinationals provide educations and training for employees creating an increasingly skilled workforce. For example, in 1997 Nike launched an education initiative to provide opportunities for contract workers to receive a higher education.1 A better skilled population will significantly increase the value of the host country perceived by other firms, which can increase investment into the economy. This can become a valuable source of capital for the host country. These skills can also be transferred to other areas of the country. Another possible benefit multinational operations would bring to the host nation is providing the government of the nation with revenue including tax that the country wouldn't of otherwise had. ...read more.

The workers describe conditions as "very tense, with constant pressure from management to reach productivity levels"11 Workers also have to work in the unbearable heat that reaches over 100 degrees. Nike contract employees have no right to freedom of association and employers do not accept trade unions. An audit of a Nike factory in Vietnam further demonstrate the unacceptable condition workers face as the audit noted, "workers were exposed to toxic chemicals without protection or safety training and were made to work illegal overtime". Another argument that Nike has a negative impact directly to workers is that they exploit workers in the host nations by paying extremely low wages. For example, Nike plays employees in Vietnam no ore than $42 a month. Alternatively it could be argued Nike still has a positive impact on the workers in the host nation because although spectators in developed world may regard the wages as low they are considerably higher than the wages they would get if domestic firms employed them. It could also be argued that workers in host countries aren't treated really badly by Nike because there are the laws of the host nation to protect them, such as minimum wages, and maximum hours employees have to work. On the other hand it also needs to be considered the nations Nike operates in want to encourage businesses to invest and may therefore design laws in favour of businesses rather than workers. This is the case in China where Nike operates where there is only recognised trade union called the all China Federation of Trade Unions (ACFTU). The government in theory to protect workers runs the ACFTU, however it rarely confronts management to uphold workers rights, as union officers tend to favour management.12 There is also the problem of Nike breaking the law. This is shown to be the case in China where Nike workers work eleven hours a day, which is a violation of Chinese law. ...read more.

There has been evidence of abuse of workers and workers have to work in terrible conditions of heat while being exposed to toxic chemicals in the glues used. This could have a detrimental effect on the health of the employees The distribution of benefits is also likely to be unequal as people working in Nike factories may find themselves in a different world compared to less developed areas of the host nation, leading to a dual economy existing between the industrial and agricultural areas of certain countries. After looking at the effects that Nike have been likely to contribute to in the nations that it outsources to it seems apparent that Nike will have a positive impact on the host nations in the long term. From looking at the development of Taiwan which used to host Nikes operations it is possible to identify three stages of development that developing countries pass through to become dynamic industrial nations, these are; Textile, manufacturing and the service sector. Foreign direct investment from companies such as Nike into the Taiwan economy enabled the economy to develop. This development was maintained through sweatshops, which were necessary at the time to provide economic growth. The economic growth allowed Taiwan to raise wages and tax levels improving with it working conditions, leading to the spread of industry as Taiwan continued to develop from increasing investment. In which case if we compare the development of Taiwan to the host nations Nike currently operates in exploitation of the workforce and low tax rates can be seen as a necessary evil to allow the host nations to grow into dynamic economies in the long term. Therefore the short-term negative impacts of Nike outsourcing into these countries will eventually benefit the countries in the long term. 1 www.Nike.com 2 The Economist 3 Nuffields, Economics and Business student book 4 Multinational Monitor, Jeff Ballinger 5 Worldfacts.com 6 Johannorberg.net 8 www.themailactivist.com 9 Worldfacts.com 10 Multinational Monitor, Jeff /Ballinger 11 "Industrial Embroidery" (see appendix) 12 Corpwatch.org 13www.Nikebiz.com 15 Corpwatch.org 16 Nikebiz.com 18 Worldfacts.com Jolene Giggs ...read more.