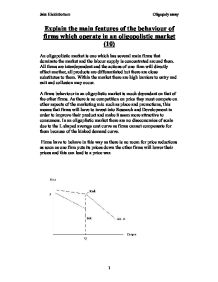 Explain the main features of the behaviour of firms which operate in an oligopolistic market (10) An oligopolistic market is one which has several main firms that dominate the market and the labour supply is concentrated around them. All firms are interdependent and the actions of one firm will directly affect another, all products are differentiated but there are close substitutes to them. Within the market there are high barriers to entry and exit and collusion may occur. A firms behaviour in an oligoplistic market is much dependant on that of the other firms. As there is no competition on price they must compete on other aspects of the marketing mix such as place and promotions, this means that firms will have to invest into Research and Development in order to improve their product and make it seem more attractive to consumers. In an oligoplistic market there are no diseconomies of scale due to the L shaped average cost curve as firms cannot compensate for them because of the kinked demand curve. Firms have to behave in this way as there is no room for price reductions as soon as one firm puts its prices down the other firms will lower their prices and this can lead to a price war. The kinked demand curve model assumes that a business might face a dual demand curve for its product based on the likely reactions of other firms in the market to a change in its price or another variable. ...read more.

So an Oligopoly behaves in a way that stays in line with its competitors or the price leader showing that firms are inter dependant and will make it decisions based upon other firms in the market. Discuss the extent to which the UK broadcasting industry is an example of an oligopoly (15) The UK Broadcasting market has many characteristics that show the market to be an oligopoly. Within the market there are a large number of firms since the introduction of cable and satellite however there are several large firms that's concentration ratio means the market is an oligopoly, the main firms are terrestrial channels BBC ITV Channel 4 and Channel 5 and the large firm of sky. Although all firms offer a television channel there is differentiation through the quality of the product and the Target markets of the channels, for example SKY is mainly focused on sport where as ITV shows mainly dramas, with the BBC showing nice programs such as gardening or documentaries. The control over price is different for SKY and the BBC as sky gain there profits through subscription fees which they set low to start then increase as brand loyalty is increased they manage to attract consumers by gaining contracts with things such as big football games etc, however the BBC control price through license fees so they have complete control over their prices. ...read more.

Game theory analysis has direct relevance to the conduct and behaviour of firms in oligopolistic markets such as the broadcasting market - for example the decisions that firms must take over the pricing of their subscription and how much money to invest in research and development spending. Costly research projects represent a risk for any of the business - but if one firm invests in R&D and another of the broadcasters decides not to They might lose the competitive edge in the market and suffer a long term decline in market share and profitability leading the market to more of a monopoly or duopoly. The dominant strategy for both firms is probably to go ahead with R&D spending. If they do not and the other firm does, then their profits fall and they lose market share. However, there are only a limited number of patents available to be won and if all of the leading firms in a market spend heavily on R&D, this may ultimately yield a lower total rate of return than if only one firm opts to proceed. I believe that game theory will be one of the main factors that determine whether the broadcasting market stays an oligopoly or further moves away from this. So Yes the market is an oligopoly however The introduction of free view and cable has meant that the market is becoming more contestable and the governments plan to remove terrestrial television by 2010 has meant that the market may not stay as an Oligopoly for long ?? ?? ?? ?? Jake Hickinbottom Oligopoly essay 4 ...read more.

There are two questions here, but this essay handles them both superbly well. The first question displays strong analysis and the second shows good evaluative skills. It was nice to see some diagrammatical analysis, and some higher level concepts were ...

There are two questions here, but this essay handles them both superbly well. The first question displays strong analysis and the second shows good evaluative skills. It was nice to see some diagrammatical analysis, and some higher level concepts were explained well. There is a clear understanding of what constitutes an oligopoly, and the extent to which the broadcasting market can be considered one.

The analysis in this essay is strong. The main components of an oligopoly are outlined in the introduction, which set a good tone for the essay. The explanation of the kinked demand curve is particularly strong, however I would've liked to have seen the term "prices are sticky" used. A few recent examples of collusion would've added to the argument, and the essay could've explored the concept of a cartel by doing this. For the first question, I wanted to see a bit more discussion about efficiency. There is no awareness that an oligopoly may not result in allocative efficiency or productive efficiency unlike other market structures. In the second question, the evaluation is also strong. The essay is able to identify why the broadcasting market shows signs of an oligopoly and then also explains why it isn't. I would've added that the oligopolistic market structure is just a model, as is any market structure, so it's difficult to place any real-life market within imposed definitions of its features. The strongest part of the essay is the last paragraph where it directly answers the question. A key phrase I would've used is "it depends upon" and I would've mentioned that it greatly depends upon the future of freeview channels and the strategy of the firms. It was pleasing to see game theory explored, as this is a higher level concept.

This essay is structured very well, having a clear introduction and a strong conclusion including a justified judgement. Each paragraph adds something new to the argument, having a clear and concise signpost. I was impressed by the number of technical terms used, and the fluency of writing. The style allows for a very convincing argument.