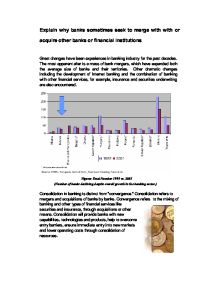 Explain why banks sometimes seek to merge with with

Explain why banks sometimes seek to merge with with or acquire other banks or financial institutions Great changes have been experiences in banking industry for the past decades. The most apparent alter is a mass of bank mergers, which have expanded both the average size of banks and their territories. Other dramatic changes including the development of Internet banking and the combination of banking with other financial services, for example, insurance and securities underwriting are also encountered. Figure: Total Number 1995 vs. 2001 (Number of banks declining despite overall growth in the banking sector.) Consolidation in banking is distinct from "convergence." Consolidation refers to mergers and acquisitions of banks by banks. Convergence refers to the mixing of banking and other types of financial services like securities and insurance, through acquisitions or other means. Consolidation will provide banks with new capabilities,technologies and products, help to overcome entry barriers, ensure immediate entry into new markets and lower operating costs through consolidation of resources. Background on recent consolidation The Riegle-Neal Act granted interstate branch banking beginning in 1997. Since then, the number of large bank mergers has risen dramatically. (Figure 1) sketch this trend along with another remarkable trend, i.e., that most of the large bank mergers in recent years involved institutions headquartered in different states; the latter point advises that these are market-expansion mergers, even though the acquirer and the target have few overlapping operations in their respective banking markets. Although the markets they serve are much bigger, until now none of these three mega banks has achieved the goal in having a banking franchise that spans all 50 states, which is feasible in law. Figure 2:Total Number of Foreign Banks, 1995 Total Number of Foreign Banks, 1995 vs. 2001 Another noticeable fact about the recently announced mega mergers is that the target banking companies are positive institutions that are likely to survive as independent organizations. ...read more.

Earlier studies found proof that diseconomies of scale did occur when total banking assets exceeded about $10 billion; however, those results were based on banking data prior to the passage of the Riegle-Neal Act, when banking companies operating in multiple states had to maintain separately capitalized, individually chartered bank subsidiaries in those states. The passage of Riegle-Neal consents these banking organizations to consolidate the individual state charters into a single charter, thus greatly regulating management and operations. On the cost part, it is obvious that the cost structure of running a network of bank branches across multiple states should be more efficient than running a group of individually capitalized bank subsidiaries. On the revenue part, research on mega mergers shows that merged banks experienced higher profit efficiency from increased revenues than a group of individual banks did, because they provided customers with higher value-added products and services (Akhavein, Berger, and Humphrey 1997). Furthermore, a banking organization of a certain scale may even earn a "too-big-to-fail" subsidy due to the market's perception of actual government support of a mega bank in times of crisis. While the mixture of all these factors could raise the most favorable scale of large banking organizations today, it remains to be seen whether a $1 trillion bank is the "right" size. The second economic force is economies of range-a situation where the joint costs of producing two completing outputs are less than the combined costs of producing two separate outputs. This may result when the production processes of both outputs share some common inputs, including both capital (such as the actual building the bank occupies) and labor (such as bank management). The passage of the Gramm-Leach-Bliley Act (GLB) in 1999 changed the range of allowable financial activities for banking organizations. In the past, banking organizations were forbidden to engage in securities activities unless on a limited, case-by-case basis through their so-called Section 20 subsidiaries. ...read more.

mixes to enhance revenues. Two research efforts taking this approach are Akhavein, et al. (1997), covering mergers in the 1980s, and Berger (1998), covering mergers in the 1990s. These studies find that bank mergers do tend to be associated with improvements in overall performance, in part because banks achieve higher valued output mixes. While these studies do not track all of the channels through which bank mergers affect the value of output, they suggest that one channel has been banks' shift toward higher yielding loans and away from securities. This channel is particularly interesting given the other results in these studies. They find that merged banks also tend to experience a lowering of their cost of borrowed funds without needing to increase capital ratios. The lower cost of funds is consistent with a decline in the overall risk of the combined bank compared to that of the merger partners taken separately. This apparently occurs even though a shift to loans by itself might be expected to increase risk. One interpretation of these results, then, is that a merger can result in a reduction in some dimensions of risk, which then affords the post-merger bank more latitude to shift to a higher return, though perhaps higher risk, output mix. The sources of diversification could be differences in the range of services, the portfolio mixes, or the regions served by the merging banks. Conclusions There are a number of possible economic forces for mega mergers, from economic efficiency to the self-interest of bank management. Due to the far-reaching changes in banking laws in the 1990s, earlier research on bank mergers may not be suitable to today's environment; thus it remains to be seen whether the current bank mega mergers result in any measurable efficiency gains. Nevertheless, the ever-growing scale of bank mergers raises challenging policy questions, including banking concentration at the national level and systemic risk concerns, that must be addressed by policymakers in the course of urging economic efficiency while protecting the nation's financial system. ...read more.