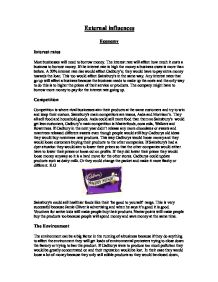 External influences Economy Interest rates Most businesses will need to borrow money. The interest rate will affect how much it costs

If they did lower their prices they would loose money anyway so it is a hard move for the other stores. Cadburys could update products such as dairy milk. Or they could change the packet and make it more flashy or different. E.G Sainsbury's could sell healthier foods like their 'be good to yourself' range. This is very successful because Jamie Oliver is advertising and when he says it's good it is good. Vouchers for active kids will make people buy their products. Nectar points will make people buy the products too because people will spend money and save money at the same time. The Environment The environment can be a big factor in the running of a business because if they do anything to affect the environment they will get loads of environmental protesters trying to close down the factory or trying to ban the product. ...read more.

They have a logo (pictured left) that is meant to appeal to kids doing things like putting litter in the bin; I think this is to show the kids they should be environmentally friendly too. This is contrasted with Sainsbury's where they are environmental steering group, which supports the board in developing policies and management systems of the environment. Sainsbury's have narrowed their efforts to cut environmentally unsafe aspects to just 3 1) Reduce the environmental impact of their products. 2) Reduce carbon dioxide emissions. 3) Reduce waste. Sainsbury's have managed to reduce the use of non-renewable energy sources such as petrol by 10% this year alone. An example of this is that Sainsbury's grow 90% of their own food in the UK this saves the cost of shipping from countries thousands of miles away. ...read more.

Although the question isn't set up here, the essay explores the main external influences well. I assume the task is along the lines of "How do External Influences affect Cadbury's and Sainsbury's". Although it is difficult to define an external ...

Although the question isn't set up here, the essay explores the main external influences well. I assume the task is along the lines of "How do External Influences affect Cadbury's and Sainsbury's". Although it is difficult to define an external influence, I would've liked to have seen a short introduction doing so. This would ensure a clear line of argument, and a focus on a certain few aspects. In my opinion I would've also discussed global issues. For example, the Libya oil crisis led to rising oil prices per barrel, which affects all businesses due to decreasing costs.

The analysis is sound, however there are plenty of places where improvements could be made. For example, when discussing interest rates, they ably explore why the firm will face increasing charges on loans. However, they don't touch on the affect interest rates have on consumers and thus demand. If the interest rate increases, consumers will be paying more on their mortgage and the firm's demand will decrease. If you want to gain the highest marks, you need to ensure all avenues are explored when one variable is changing. If I was doing this essay, I would've gone further to say that Cadbury's and Sainsbury's sell goods where the income elasticity is inelastic. This would incorporate more higher level economic concepts whilst applying it to the context of the question. Showing such skills will hit most of the assessment objectives. It was nice to see some awareness of environmental issues, as this is very topical today. However, this discussion could be more sophisticated. Instead of "If Cadburys were to produce too much pollution they would be greatly concentrated on" I would've said "If Cadbury's were to produce high levels of pollution, they will incur higher levels of tax from the government". Although this is also higher level concept, when talking about competition the essay could explore oligopolies and game theory. A discussion of whether Sainsbury's own strategy affects the competition's strategy would be a perceptive option. Such further research or understanding of higher level concepts will ensure you reach the top marks for analysis.

This essay has a clear structure, outlining the different external influences. I would've liked to see an introduction showing knowledge of what an external influence is, as this will gain easy marks. A strong conclusion evaluating the significance of external factors to a firm's competitiveness or profitability would've allowed this essay to reach top marks. I know this isn't explicitly asked in the question, but showing such techniques will gain credit whenever shown.