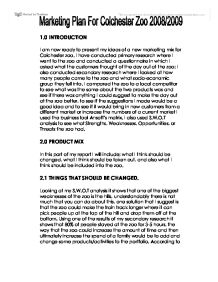 I am now ready to present my ideas of a new marketing mix for Colchester zoo. I have conducted primary research where I went to the zoo and conducted a questionnaire in which I asked what the customers thought of the day out at the zoo; I also conducted secondary research where I looked at how many people came to the zoo and what socio-economic group they fell into. I compared the zoo to a local competitor to see what was the same about the two products was and see if there was anything I could suggest to make the day out at the zoo better, to see if the suggestions I made would be a good idea and to see if it would bring in new customers from a different market or increase the numbers of a current market I used the business tool Ansoff’s matrix. I also used S.W.O.T analysis to see what Strengths, Weaknesses, Opportunities, or Threats the zoo had.

2.1 THINGS THAT SHOULD BE CHANGED.

Looking at my S.W.O.T analysis it shows that one of the biggest weaknesses of the zoo is the hills, understandably there is not much that you can do about this, one solution that I suggest is that the zoo could make the train track longer where it can pick people up at the top of the hill and drop them off at the bottom. Using one of the results of my secondary research it shows that 80% of people stayed at the zoo for 3-5 hours, the way that the zoo could increase the amount of time and then ultimately increase the spend of a family would be to add and change some products/activities to the portfolio. According to the ‘Colchester Zoo visitor survey June to August 2003’ 0% of people believed that the zoo was good value for money.

2.2 THINGS THAT SHOULD BE ADDED.

2.3 THINGS THAT SHOULD BE REMOVED.

The zoo is placed in a very fortunate place. It’s situated just off the A12, this is good because it is a direct route to London and it is also straight to the coast. The zoo is sigh posted off the A12, this is a good marketing technique because if families are heading towards the coast and then the children see the sigh for the zoo they will use the ‘nag factor’ to try and get there parents to take them. People can buy their tickets from a number of places. One place that they can buy tickets is on the internet, this is becoming increasingly popular as more and more people use the internet now-a-days, not only can people buy ticket on the internet at home but people can now get the internet on there phones. Another place that customers can buy there tickets from is the zoo its self, this is a direct channel of distribution as you don’t have to pay another business. Before you leave the zoo you have to exit through the gift shop, this is a good marketing ploy because children will walk through the shop and she products that they like and ask there parents if they will buy them, also at the till they put small products such as sweets or key rings on show, this is called point of sale.

I believe that the zoo has two current pricing strategies. These are price discrimination and competition pricing. price discrimination is where the zoo offers different prices for different customers, the reason that they do this for disabled customers is because there are a number of steep hills in the park so they offer a cheaper price to these customers so they are more encouraged to visit the zoo. I think that the zoo should keep their current method because for the type of business that it is these methods a suitable. Although there is one method that I would think about including, this is complementary pricing, the reason I would do this is because you could have a cheaper entry fee, and to make up for the loss you would increase the price of food and drinks because people will always buy them.

5.1 ABOVE THE LINE PROMOTION

Above the line promotion is where a firm uses media purchased from other firms such as television, newspapers, magazines, cinema, radio, and posters a down side of this form of promotion is that the firm does not have direct control of the media. The zoo has been known to advertise on the side of buses, this is a good way of promoting the product because the buses go through the busy towns and through villages so lots of people will see this advert, the zoo did try to advertise on the television; this did not work as well because people now-a-days turn over the channel so they don’t have to watch the adverts. I advise that the zoo records an advert to play in the cinemas around East Anglia, as a result of this people will have to watch this advert because they cannot change the channel. In the video you could include a family from the target audience having fun; this is showing the type of people that come to the zoo and what will happen when they come. The reason I would advertise in the cinema is because the advert could be informative and persuasive but still look like fun. This advert would only be shown before films that are rated U or PG; my reason for this is that the target audience is more likely to be in the cinema watching these types of film.

5.2 BELOW THE LINE PROMOTION

Below the line promotion is promotion that does not use the same types of media the above the line promotion does but uses methods that the firm has more control over, these include trade fairs, merchandising, personal selling, direct mail, public relations, exhibitions, packaging, and sales promotions.  For a form of sales promotion I would suggest offering 15% of food when a group of more than 5 come through, as a result of this more people would be buying food so then you would not make a loss on the sales of food. As a public relations event you could use one of the following that the zoo has already used, like a new baby being born in the zoo or a new enclosure being built, this is good public relation events because they are free to hold and you will get free press coverage because people will want to know about new baby animals being born. The best time to hold both of these promotions would be early June or just before the summer holidays begin, the reason for this is because these times the target segment is most likely to visit the zoo. As a result of holding these promotions more people would come and visit the zoo which will bring more profits.