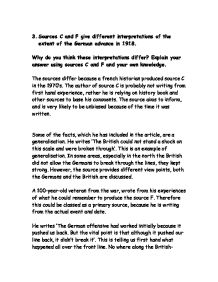 3. Sources C and F give different interpretations of the extent of the German advance in 1918. Why do you think these interpretations differ? Explain your answer using sources C and F and your own knowledge. The sources differ because a french historian produced source C in the 1970's. The author of source C is probably not writing from first hand experience, rather he is relying on history book and other sources to base his comments. The source aims to inform, and is very likely to be unbiased because of the time it was written. ...read more.

However, the source provides different view points, both the Germans and the British are discussed. A 100-year-old veteran from the war, wrote from his experiences of what he could remember to produce the source F. Therefore this could be classed as a primary source, because he is writing from the actual event and date. He writes 'The German offensive had worked initially because it pushed us back. But the vital point is that although it pushed our line back, it didn't break it'. ...read more.

Source F was written by a 100 year old veteran of the first world war, who presumably was in service at the time of the German Offensive, he gives a one sided account of the situation. Writing from experience he was unable to comment on the German position, because he did not know their situation. Source C on the other hand was written by a French historian in 1973. He based his writing on infomation gathered from other texts and sources and provides a more balanced account than Source F. However, Source C is more of a generalisation than source F. ...read more.