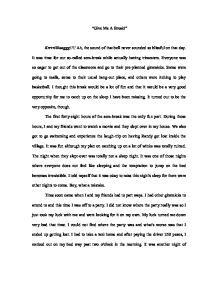 "Give Me A Break!" Krrrriiiinnggg!!!! Ah, the sound of that bell never sounded so blissful on that day. It was time for our so-called sem-break while actually having trimesters. Everyone was so eager to get out of the classroom and go to their pre-planned gimmicks. Some were going to malls, some to their usual hang-out place, and others were itching to play basketball. I thought this break would be a lot of fun and that it would be a very good opportunity for me to catch up on the sleep I have been missing. It turned out to be the very opposite, though. The first forty-eight hours of the sem-break was the only fun part. ...read more.

I did not know where the party really was so I just took my luck with me and went looking for it on my own. My luck turned me down very bad that time. I could not find where the party was and what's worse was that I ended up getting lost. I had to take a taxi home and after paying the driver 250 pesos, I conked out on my bed way past two o'clock in the morning. It was another night of ruined sleep since I had to wake up early again to go Halloween shopping with my mother. Halloween was no fun either. Our maids were out on vacation so I had to clean the car, fix my own bed, and wash the dishes. ...read more.

We got to Laguna in four hours and we came home at around one in the morning. The day ended and sleep still seemed to be in a far off place. However, I found sleep in the following days. I only had three days of complete sleep and during those days, no fun seemed to arrive my way. I had no gimmicks or whatsoever and the greatest thing I accomplished was to only finish one book entitled 'The Twelfth Angel'. Those days gave me the feeling that I was not alive at all. The sem-break was surely not at all what I thought it would be. It only seemed to tire me more and when I had the chance to rest, the expected 'fun' was not in it. What a sem-break! ...read more.