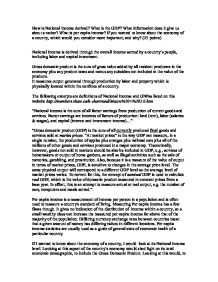 How is National Income derived? What is the GDP? What information does it give us about a nation? What is per capita income? If you wanted to know about the economy of a country, which would you consider more important, and why? (25 points)

How is National Income derived? What is the GDP? What information does it give us about a nation? What is per capita income? If you wanted to know about the economy of a country, which would you consider more important, and why? (25 points) National Income is derived through the overall income earned by a country's people, including labor and capital investment. Gross domestic product is the sum of gross value added by all resident producers in the economy plus any product taxes and minus any subsidies not included in the value of the products. It measures output generated through production by labor and property which is physically located within the confines of a country. ...read more.

Theoretically, however, goods not sold in markets should be also be included in GDP, e.g., services of homemakers or output of home gardens, as well as illegal activities such as the sale of narcotics, gambling, and prostitution. Also, because it is a measure of the value of output in terms of market prices, GDP, is sensitive to changes in the average price level. The same physical output will correspond to a different GDP level as the average level of market prices varies. To correct for this, the concept of nominal GDP is used to calculate real GDP, which is the value of domestic product measured in constant prices from a base year. In effect, this is an attempt to measure actual or real output, e.g. the number of cars, computers and meals served.". ...read more.

Differing currency exchange rates between countries mean that a given amount of money has differing values in different locations. Per capita income statistics are usually used as a guide of general state of economic health of a particular country. If I wanted to know about the economy of a country, I would look at its National Income level. Looking at this aspect of the country's economy would shed light on its total economic demographic, to include the Gross Domestic Product. Looking at this would, to me, be the most effective means of identifying the economics of the country because it would outline not only the income and outflow of monies but also the gross value of the countries production and assets. These things all effect the total economic backbone of a country, and hence remain the key areas to obtain an effective overview of its economic prowess. ...read more.

This essay engages well with the task, looking into the measure of national income, and then GDP. The first few questions give a good outline of both GDP and national income, which shows a good basic understanding. However, the last ...

This essay engages well with the task, looking into the measure of national income, and then GDP. The first few questions give a good outline of both GDP and national income, which shows a good basic understanding. However, the last question is neglected, and this is the one which encompasses all the previous analysis. If I was doing the last question, I would've explored the advantages and disadvantages of both, making a justified judgement to which gives a more informed view of the economy. By looking at limitations, you are able to access evaluative marks.

The analysis in this essay is sound, but at times it could be more clear. For example, I would define national income as "a measure of the money flow due to output of goods and services over a period of time". This essay seems to confuse national income for the total income of households, which is wrong. I liked how they picked up on GDP measuring domestic output - it would be useful to note here that GNP includes output abroad which results in money flows into the economy. Showing such awareness will gain credit. There is a discussion of real and nominal GDP, which is good, but I would've liked to have seen exploration of why real GDP figures are important. A simple explanation including varying inflation rates between economies would've sufficed. The judgement in the conclusion is a bit weak, as it doesn't draw upon any advantages and disadvantages as these aren't previously explained. If you set up the argument by giving a balanced argument, then making a justified judgement, you'll ensure the analytical groundwork is there. I would note that evaluating without analysis will gain little credit in exam questions or coursework pieces. If I were doing this essay, I would've questioned whether either indicator is strong, exploring the Human Development Index or similar. By being inquisitive, you are able to get strong evaluative marks quite easily!

This essay has an okay structure, yet the paragraphs are on the short side. A paragraph shouldn't be one sentence, as this shows you lack the ability to elaborate on points and with that gives the impression you lack knowledge. It also suggests that the argument isn't coherent as points don't flow so well! I would advise not using the first person, as this suggests your viewpoint is more opinion-based rather than evidence driven. If you use phrases such as "the evidence makes it clear that" or "from the analysis above, it could be argued" you'll become more sophisticated. Spelling, punctuation and grammar are fine, even if "labour" was spelt the American way!