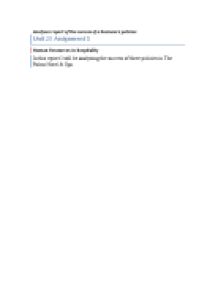 work schedules. On the other hand several employees have complaints regarding the uniform code as well as the overtime pay, a minority think that the hotel needs to higher the prices, which is perfectly natural for employees to want a raise but a majority stated that the money the hotel provide for overtime is satisfactory, in my opion regarding the complaints about the dress code, employees would like to have less strict and formal attire around the hotel in order for them to have a more flexible confortable work environment. Sexual and Other Harassment policy Any type of harassment in general is not tolerated in The Palms Hotel & Spa regarding males and females including any of the following: discriminatory harassment, sexual harassment, offensive jokes, mocking or mimicking another employee also offensive materials or sayings in the hotel premises. All these harassments affects the performance of the employee which results in creating a humiliating and intimidated work environment. The above harassments are prohibited and if any member of staff witness or is involved of the above harassments they must immediately report it to any management representative. ...read more.

workers which is beneficial for The Palms Hotel in one aspect which is the costs but the absentees of these workers still remain an issue because the position these guest workers hold, their punctuality and regular attendance are essential for The Palms Hotel to efficiently conduct business, therefore the hotel has really strict policies regarding the attendance. Language and cultural differences can also create a huge problem for the human resource such as, communication problems between the employees including managers and workers. These guest workers tend to leave their jobs without notice also their absentee rates are considered to be bellow average or expected attendance which is considered to be job abandonment in this hotel therefore the hotel has strict rules and regulations, excessive absenteeism will result in disciplinary action up to and including termination of employment. This also increases the labour turnover rate, which is considered to be a disadvantage for the hotel because the recruiting processes as well as the short listing, interviewing and need for training will just add more costs and use more time from The Palms Hotel human resource department. ...read more.