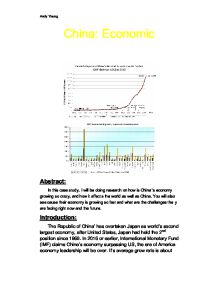 In this case study, I will be doing research on how is Chinas economy growing so crazy, and how it affects the world as well as China. 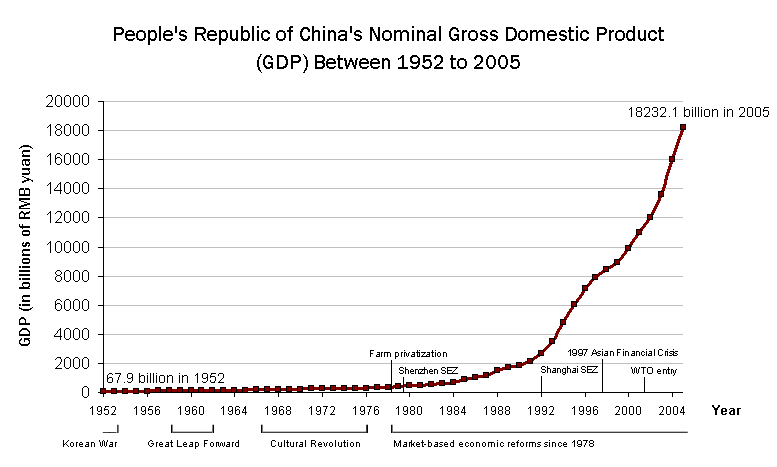 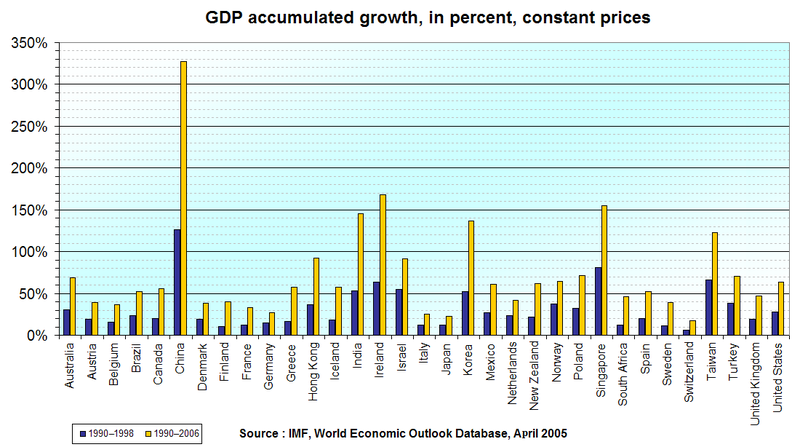 In this case study, I will be doing research on how is China’s economy growing so crazy, and how it affects the world as well as China. You will also see cause their economy is growing so fast and what are the challenges they are facing right now and the future.

The Republic of China’ has overtaken Japan as world’s second largest economy, after United States, Japan had held the 2nd position since 1968. In 2016 or earlier, International Monetary Fund (IMF) claims China’s economy surpassing US, the era of America economy leadership will be over. It’s average grow rate is about 10% for pass 30 years, making them as the world’s fastest growing economy. China has also climbed to the world’s largest exporter and second largest importer in the world.  China has considerable economic weaknesses like low income levels, resource depletion and high unemployment, whereas the U.S. has comparable strengths and is poised to remain a global leader:

Why is their economy growing so fast?

The reason why their economy is growing dramatically, we will have to start from 1978, when the government executed a bunch of strategies for economy reform. These programs are including, encouraged rural enterprises, private businesses, liberalized foreign trade, investment, less control over prices, invested in industrial production, educate their workforce. Their economy had an annual growth of 6% initially, and peak of 17 percent, plus every capital income was quadruple in last 15 years. In 1997, some experts had already predicted that the China economy would sure be bigger than the US in less than 20 years. Here is IMF research team conclusion: New factories, manufacturing machines, communication systems and the amount of Chinese workers, increase in productivity were the factors that putting them as one of the strongest economy country. 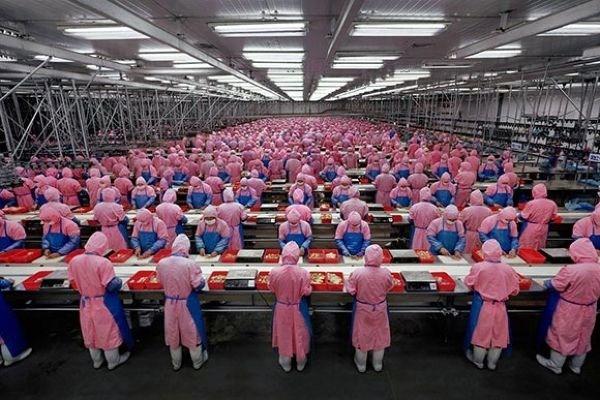 China was rank third in the automobile industry by 2006 after Japan and US. During the reform, their automotive productions were less than 14000 yearly. Guess what? By 2002 their production jumped all the way up to 3.25 million! And 2009, it reached to 14 million. In 2009, China passed the States to become number 1 car maker worldwide. Domestic sales stayed with production, in 2006 8 million of cars were sold, which includes 5 million passenger cars and 2 million of commercial cars which shows how low price they sold their cars. The vehicles industry has been so successful in China so they begin to target exporting body parts worldwide in 1999.China has made a big step planning to get involved into 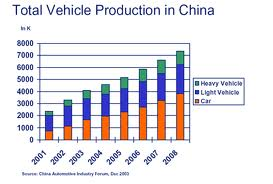 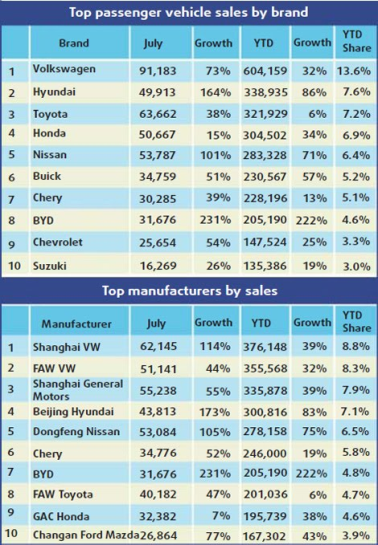 Coal is one of the most important natural resources for China, the most conserves mineral resources are considered to be coal and iron ore. Although they can be found in nearly most of the provinces, almost all of them are located in the northern part of China. A lot of good quality coals like bituminous coal are mostly reserved in China, Anthracite coals also present in some areas but its quite rare overall, that’s mostly found in Rocky Mountain. Coal helps the bulk of China’s energy consumption (75% in 2006), which led them again the world’s largest producer/consumer of coal. China usage of coal will be increasing dramatically as their economy continues to rise in absolute terms. If China keep increasingly rely on coal as a power consumption, it is going to put them becoming largest acid- rain causing sulfur dioxide and greenhouse gases.

China oil resources are also majorly located in north area provinces; types of oil include Oil shale and light oil. They uses up most of their oil output but doesn’t export any crude oil products, they are starting to develop oil deposits in China Seas and other oceans. Amount of natural gas reserves is unknown because they have only done a little exploration job on natural gases, Szechuan province accounts the most known natural gas reserves and production.

China has a great hydroelectric production due to their great river network and the mountainous terrain. A lot of the hydroelectric stations are located in the southwest of the country where low amount of coals are found but demand for energy is high. The potential of energy in north is small but the first hydroelectricity power station was built there by the Japanese during the occupation. In the winter, they have lower amount of rainfall, therefore, the stations are usually run less than the normal capacity, on other hand, flood always occur in the summer.

What are the challenges that China is facing?

Inflation is definitely one of the most challenges globally, but it is definitely the worse disaster for China that other countries. For clothes, the costs jumped 1.5% in April, it is the biggest up since 1997. For non-food, it didn’t have that much of different but it was still about 3%. For food, the price has inflated 11% on April which is 2 times the CPI.