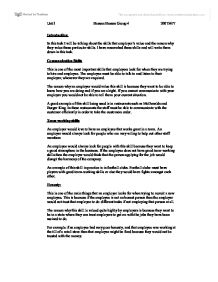 In this task I will be talking about the skills that employers value and the reason why they value those particular skills. I have researched these skills and will write them down in this task.

In this task I will be talking about the skills that employer’s value and the reason why they value those particular skills. I have researched these skills and will write them down in this task.

This is one of the most important skills that employers look for when they are trying to hire and employee. The employee must be able to talk to and listen to their employer, whenever they are required.

The reason why an employer would value this skill is because they want to be able to know how you are doing and if you are alright. If you cannot communicate with your employer you would not be able to tell them your current situation.

A good example of this skill being used is in restaurants such as McDonalds and Burger King. In these restaurants the staff must be able to communicate with the customer efficiently in order to take the customers order.

An employee would always look for people with this skill because they want to keep a good atmosphere in the business. If the employee does not have good team-working skills then the employer would think that the person applying for the job would disrupt the harmony of the company.

An example of this skill in practice is in football clubs. Football clubs must have players with good team-working skills or else they would have fights amongst each other.

This is one of the main things that an employer looks for when trying to recruit a new employee. This is because if the employee is not an honest person then the employer would not trust that employee to do different tasks if not employing that person at all.

The reason why this skill is valued quite highly by employers is because they want to be in a state where they can trust employers to get on with the jobs they have been assined to do.

For example if an employee had very poor honesty, and that employee was working at the till of a retail store then that employee might be fired because they would not be trusted with the money.

The reason why an employer would value this is firstly it saves them a lot time, and secondly they would feel that you are trusted to get on with your work.

An example of this skill in use, is in schools where the teachers must get on with own work, instead of having their boss telling them what to do.

Employers would prefer an employee that dedicates his time and efforts to the company, rather than someone who doesn’t care about the business. This particular skill would be very useful to the employer even if the company is not particularly loyal to its employees.

An example of this skill in use is in schools, where the teachers are more likely to get a promotion because they have been at the school for a long time.

This is because employers would like to have someone who acts as a shadow to them. By this I mean someone who could take the place of the boss if he/she was not avalable.

A very good example of this skill is in schools/colleges/universities, where there is a structured system that has a head for everyone, and a head for each particular group. This means that every head of year or head of a course would have a lot leadership and management skills.

There have been a lot of recent news headlines lately on people who have been victims of racism, and companies have had a lot of troubles with it as well.

The reason an employee would like this particular skill is because they would not want to have their business in the news for the wrong reasons, because one of their employees has offended someone of another race.

A very good example of this is in the Metropolitan Police, where there are many officers from different parts of the world.

In the present world almost all jobs now require that you know some basic understanding of computer hardware and software, with the main software’s being used are; word processing, spreadsheets, and email software’s.

The reason why an employer would look for this skill is because they could have an employee that can use computers when required.

An example of this in practice is in schools and colleges where even the class registers are being done via a computer.

This particular skill is not looked at as it should be in my opinion, because not that many employers look for motivational skills as a necessary skill but rather as a secondary or even third skill.

The reason why I believe that this skill is valued by certain employers is because if an employer has an employee with good in motivational skills then they could rely on that employee to motivate the other employees.

An example of this is in supermarket stores such as Sainsbury’s and Tesco where they have certain staff members willing on other people to achieve their best.

People have always said that you are never too old to learn, and I believe that this is a very true statement, because you will always find people of different age groups in universities as students.

The reason why an employee values this skill is because it could potentially mean that the business expands in the long run. For example if an employee is willing to learn, the employee would develop their skills even further therefore helping the company to achieve their best.

An example of this is apprenticeships, where they teach you and give you a paid job as well, depending on how well you have progressed.