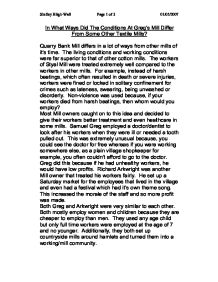 In What Ways Did The Conditions At Greg's Mill Differ From Some Other Textile Mills?

In What Ways Did The Conditions At Greg's Mill Differ From Some Other Textile Mills? Quarry Bank Mill differs in a lot of ways from other mills of it's time. The living conditions and working conditions were far superior to that of other cotton mills. The workers of Styal Mill were treated extremely well compared to the workers in other mills. For example, instead of harsh beatings, which often resulted in death or severe injuries, workers were fined or locked in solitary confinement for crimes such as lateness, swearing, being unwashed or disorderly. Non-violence was used because, if your workers died from harsh beatings, then whom would you employ? Most Mill owners caught on to this idea and decided to give their workers better treatment and even healthcare in some mills. ...read more.

Additionally, they both set up countryside mills around hamlets and turned them into a working/mill community. They both built houses, churches, schools and shops for their employees but there are many things that set them apart. For example, Arkwright ran shifts that were 2-12 hours and the mill ran 24 hours a day whereas Greg's shifts where 1-13 hour shifts and no nights. In many mills, the food had no variety and was served in very small portions. An apprentice from Cressbrook Mill commented, "We went to our work at six in the morning without anything at all to eat or fire to warm us. For about a year after I went we never stopped for breakfast. The breakfast was brought to the mill in tin cans on large trays. It was milk, porridge and oatcake. ...read more.

Thursday if we had bacon on Wednesday we had milk and bread. Friday we used to have Lob Scouse (stew). Saturday we used to dine on thick porridge. We had only water to drink, when ill we were allowed tea." The wages were too very different. Even though in other mills, children were paid 1/6 of the adult wage that was still more than what the children at Styal were paid. Wages at Styal were lower than the average cotton mill presumably because of the free healthcare and good food as well as the provided religious services and education for the apprentices. The Styal apprentices appear to have lived better than many of their contemporaries and this is clearly shown in all the evidence above. Greg's mill was the first of it's kind; a revolutionary step in the cotton making industry and it set the mould for other cotton mills to fall into. Shelley Bligh-Wall Page 1 of 3 01/05/2007 ...read more.