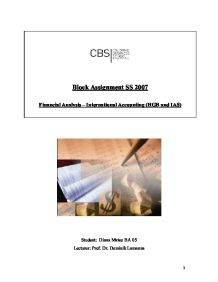 all earnings are going to be calculated in the same period they are earned. Bills receivables can be activated as soon, as the building process started (Principle of realisation and percentage-of-completion-method). However, the following criterions need to be covered: - Clearing of the whole amount is likely. - A clear identification of costs linked to the order is possible. - A reliable detection of total cost and process status is given. For balancing using the IAS there is no prescribed pattern, but a prescription that says which positions need to be covered. Therefore the following diagram is a proposition of disposition only. Assets that are going to stay longer than 1 year within the company are called non-current assets. All others are only current within the company. Most accruals are current (on the active, as well as on the passive side). In IAS also former costs that count as investments can be calculated on the asset side. However it needs to be likely that investments are going to cover at least the generated costs. And the generated cost needs to be definite (more about that, see 3.1.3. intangible assets). 3.1.2. Property, Plant and Equipment - Tangible Assets HGB: Tangible assets which are used within the company are items to be shown on the assets side of the balance sheet (� 247 II HGB). For evaluation an asset, either historical or production costs must be calculated. Depreciation is fixed and listed in diagrams of depreciation (Afa-Listen). IAS: Using the 16th IAS guideline, tangible assets can be evaluated using historical or production costs. Further it is allowed to evaluate an asset new, using either the actual market value or the costs of replacement. ...read more.

Member States would be allowed to extend this requirement to unlisted companies and for preparing individual accounts. Since transparency and comparability are of particular importance for financial institutions, this policy will also cover listed banks and insurance companies."11 However, it is not that easy to get through the theoretical ideas of uniformity. Today, seven years later, in 2007 there is still no uniformity reached, but at least the direction is fixed more or less. In about more 5-7 years the standard may be established everywhere around European members. An interesting question to clear: Why has the IAS and not the US-GAAP been chosen for becoming European standard? "Allowing the use of US-GAAP would run against the fundamental objective of the strategy to move in the direction of one single set of global standards. US standards are certainly equivalent to IAS. However, they are developed without any input from outside the US. US-GAAP is also very detailed, reflecting the litigious environment in the US which calls for more and more detailed regulation. US-GAAP cannot be detached from the regulatory intervention by the SEC. EU companies applying US-GAAP are automatically supervised by the SEC. Allowing the application of US-GAAP within the European environment as an alternative to IAS would give an unwarranted advantage to US interests. US-GAAP is also difficult to manage because it is a moving target."12 From that one more interesting thing can be concluded. While the world goes international, the European Union is still trying to stay more or less independent from the US (in terms of uniformity). Uniformity is an indicator for close relationship, since it makes transactions and business operations easier and more efficient. If the EU does not think about choosing the direction of becoming uniform to the USA, really close relationships in the future (and total globalisation) does not seem to be planed yet. ...read more.