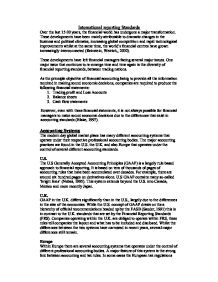 International reporting Standards Over the last 15-20 years, the financial world has undergone a major transformation. These developments have been mainly attributable to dramatic changes in the business and political climates, increasing global competition and rapid technological improvements whilst at the same time, the world's financial centres have grown increasingly interconnected (Reinstein, Weirich,, 2002). These developments have left financial managers facing several major issues. One major issue that continues to re-emerge time and time again is the diversity of financial reporting standards, between trading nations. As the principle objective of financial accounting being to provide all the information required in making sound economic decisions, companies are required to produce the following financial statements: 1. Trading profit and Loss Accounts 2. Balance sheets 3. Cash flow statements However, even with these financial statements, it is not always possible for financial managers to make sound economic decisions due to the differences that exist in accounting standards (Blake, 1997). Accounting Systems The modern day global market place has many different accounting systems that operate under their respective professional accounting bodies. The major accounting practices are found in the U.S. the U.K. and also Europe that operates under the control of several different accounting standards. U.S. The U.S Generally Accepted Accounting Principles (GAAP) is a largely rule based approach to financial reporting. ...read more.

there would be less interpretive and implementation guidance...for applying the standards. Under IAS the rules which follow logically from the principles have much less complex exceptions than U.S GAAP IAS in Europe In an attempt to remove the barriers to cross border trading in securities by ensuring that company financial statements are transparent and comparable, in March 2002, the E.U. ruled that all companies with public shares listed in the European market must bring their financial statements into line with IAS standards by 1st January 2005. This will mean some 7,000 companies who currently use their national GAAP taking on IAS. Senior management have began to recognise the far reaching impact that IAS will have on their businesses, with failure to implement these standards putting their company at a competitive disadvantage. Global Harmonisation Harmonization of worldwide standards has emerged, primarily due to: * increased pressure from competitive global markets * the recently reorganized ISAC, which has long sought to harmonize such standards * Increased requirements for additional information regarding company financial performance * Standardisation of o Presentation formats o Comparable valuation principles o The presentation of standard minimum information, that must be a fair and accurate view of the company performance. (McElree, 2003) In recent years many multinational businesses have entered into international accounting harmonisation to reduce both the cost of analysing accounts from different countries and from running different accounting systems in different countries. ...read more.

The French and Spanish have their accounting practices closely linked to their tax systems which will need to be separated to allow for international standards to be introduced. The proposed international accounting standards will also diminish the amount of options available under the accounting rules. Such things as the calculation of depreciation and the valuation of assets will be given a set rule with no other options in the way its value will be calculated. This will ensure that all values are calculated in the same way allowing for comparisons to be conducted more effectively and accurately. The Future The Financial Accounting Standards Board (FASB) who represent America and the International Accounting Standards Board (IASB) who are the European representatives are working closely to bring their standards nearer to international norms. These new rules that the IAS has outlined must be abided by January 2005. The same goes for the US companies under the (FAS) bringing all standards in line with each other. The ultimate goal is to create one set of global accounting standards. In doing so will boost cross-border investment, deepen international capital markets and save multinational companies, who must currently report under multiple systems, a lot of time and money (Vesey, 2003). They aim to achieve this by reducing options open to accountants regarding valuation of assets, calculation of profits, valuation of stocks and use of discretion in preparing accounts. ...read more.